Ever since I put the article in the Amador Ledger Dispatch on 11/26/10, I've had terrible luck at the Trout Pond. Last year (2009) I fished the pond five times between November 4th and the end of the year. I caught twenty-four in that period and was never skunked. Since I published that article, I've fished the pond five times and been skunked four of the five, with the one time only producing one fish.

I talked to the Ranger and he claims that they are stocking the heck out of the pond. Today I spent six and a half hours soaking Power Bait and got one hit, but missed it. There were about fifty people fishing around the pond and I didn't see but one fish caught. So where the hell are the fish?
I take that back, I did see one fish, chased up to the shore by this particular Cormorant. Had I been quick enough and grabbed my net I would have had at least one fish. But alas, twas' not to be. 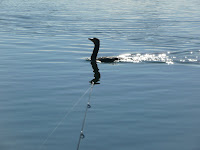 Achieving my goal by the end of the year (Tomorrow) seems less and less likely. Rumor has it the fish are sticking to the bottom like they were glued there. Oh yeh, you know Comorants eat fish, right? Well, the Ranger wouldn't let me bring my .22 out there and shoot a few. Guys' got no sense of humor. Well, actually he does. I mentioned that the last two times I've been out there, he's come by and asked to see my license. I explained that prior to those times, I've only been asked once since I was 16. I also explained that since the first time he asked, I've been skunked. He quietly slipped away. I'd call that a sense of humor.
So, I figure I'm jinxed. What I need is a good exorcism (what would I do without Merriam-Webster). Maybe something without spinning heads and spitting green stuff, OK. Anybody out there know a good exorcist?
Might try once more tomorrow and see if I can scare up a couple. Let you know if I do. One last thing, Ed MacDonald from Wandering Fisherman is my 90th follower. Another milestone. Thanks Ed.
Till next time, or possible next year.
Mark
Posted by Mark Kautz at 4:13 PM