A while back, Joe from Flowing Waters (everyone knows him from the Outdoor Blogger Network) sent me a bunch of flies. This was back when I was just getting started fly fishing and he thought I could make use of them. Well, I've been trying without much luck, until today.

I spent about 4 1/2 hours flippering around the Camanche Trout Pond throwing all the tried and true black Wooly Buggers, Olive Wooly Buggers, Tungsten Beadhead Thinmints, chartreuse green Wooly Buggers, chartreuse and orange Power Worms and I even sank to the depths of fly fishing and put a live night crawler on, in an attempt to catch a fish and break the skunk. Nothing.

As I was digging through my fly box that held all my Wooly Buggers, I came across a few Seal Buggers that Joe had sent me. So I tried a black one and an olive one , but they couldn't interest fish one. Then I tied on a rust colored one and on the fourth cast (how do I know it was the fourth cast, you ask? I count casts, so I don't spend a lot of time on a color when it isn't producing) this little sweetheart below found it interesting enough to gulp. The fight was on. 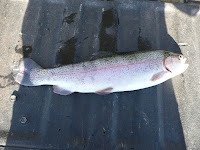 Once I had it in the net, two things happened. One, I didn't put the camera in the Float Tube Cumberland, that's why it's sitting on the tailgate of my truck and two, thought I'd better bring it home for Bob, since I haven't replenished his stash recently. Been skunked a couple of times recently, if you'll recall.

So, how about the stats? 17 1/2 inches long, 2 lbs 4 ozs on the handy dandy Berkley digital scale. Not a bad way to break a skunk although it was the only one I caught today. Did have a couple of bumps, though.

Thank you, Joe for the flies and I'm thinking this is the biggest one I've caught on a fly rod. The first two I caught, right after getting my first rod were big, but I don't think, this big. Kudos to you, my friend.

Second thing today is that I ran into a guy fishing from a float tube that had read my article in the local paper and came out to try his luck at the pond for the first time. He didn't manage to catch one, but I'm sure he'll be back. Man, I was stoked.

Third, the local paper ran my fifth article in today's edition. If you want to take a look, here is the link: http://www.ledger-dispatch.com/sports/sportsview.asp?c=275950

It's got a good picture of the Shoreman and a nice little Big Bear Rainbow.