Left the house at 0730 with the intention of launching the Float Tube Cumberland in Lake Amador. The further I dropped in elevation, the foggier it got. When I finally got to the lake, you could barely see your hand in front of your face. Check it out. 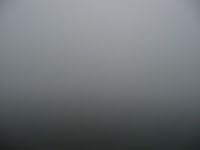 This "stuff" is called Tule Fog. Tule fog is a thick ground fog that settles in the San Joaquin Valley and Sacramento Valley areas of California's Great Central Valley. Tule fog forms during the late fall and winter (California's rainy season) after the first significant rainfall. The official time frame for tule fog to form is from November 1 to March 31. This phenomenon is named after the tule grass wetlands (tulares) of the Central Valley. Accidents caused by the tule fog are the leading cause of weather-related casualties in California.

The option of launching disappeared when I checked in. There's no way I was going to be in a float tube and get run over by some boat that couldn't even see me. Besides, the Float Tube Cumberland doesn't have a fog horn.

Plan B - Go to the spot across the lake from where we usually fish and give it a try over there. I wandered around the area for about 30 minutes and it was impossible to see the lake, let alone find the place I was looking for.

Plan C - Try and find my way back to the resort and make my way to the point by the spillway. The road I was on spit me out at a shack that just happened to be at the dam and I was able to get across and down the road to the parking spot.

Mark, that's Bear River Mark, was already there and had landed a 6lb-2oz male Cuttbow. I got one rod in the water with Rainbow Power Bait and put a Kastmaster in the Brook Trout color (got my order from Fishermans Warehouse yesterday) and out it went. I couldn't get a fish to touch my line to save my life. I went from somewhere around 0900 to almost 1:00pm and nothing.

Mark packed up and left, just about then, and I moved to the spot by the spillway where he had been. By the way, that one was all he got today. My Power Bait was out for about 15 minutes and I landed one of the 10" stocker Rainbows. About 15 minutes later, I reeled in my second stocker. I actually snagged a rig that the fish had previously taken and pulled him in that way. Does this count as a catch?

I packed up and left at 2:00pm, got to be home to feed the cats on time, you know. Left the two for Yuki to add to his one.

The sun did show it's face, somewhat, at about 1:00pm, but it was still hazy. Clear enough that I could see across the lake to the spot I wanted to fish and couldn't find earlier.

Not a terribly productive day, but not a skunk. Did see several big ones caught in our general vacinity, but none that wanted anything we offered. That's it for Friday. Have a great weekend.