Mark Gets His First Trout

No, not me. Not Mark & Rich, Mark. Not Mark from Bear River. A new Mark. We're everywhere, like Starbucks. Mark is 9 years old and the trout in the net is his first. They didn't have a scale, but I'd estimate it at around 4+ lbs. A good way to start a fishing career. Let me tell you, he was way stoked. 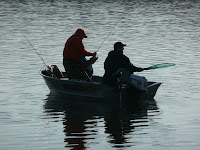 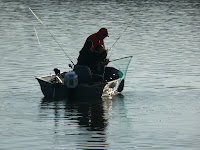 Yesterday was one of those Pine Needle raking days, where I raked my butt into the ground. I don't know what's wrong with me, I do it every year, and every year it gets harder, but unfortunately the California Department of Forestry has this 100' defensible space thing around your house and they they get really picky if you don't have it cleared. So, I called this morning to find out if it was a burn day and was informed, it wasn't. I had the option of raking some more pine needles or going fishing. What do you think?
Got to the lake (Amador) at 0845 and set up one rig with a slip sinker rig and Rainbow Power Bait. Used Kastmasters on the other. Over the first three hours I landed three 10" stocker Rainbows all on PB. Yuki and his daughter showed up, just as I was landing the third one. They wandered over to the other side of the spillway and fished over there.
The rest of the day was a bit slower until I caught the next one at 12:30. 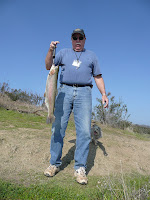 I wanted to let her go as I usually do with a personal best, but unfortunately she was bleeding. After that, zip. Packed up at 1:3o and headed home. Needed to make sure I was home by 4:00pm to feed the cats. If I'm late, I walk in the door and the cats are pointing to their watches wanting to know when they are going to get fed. Don't need any more calls from the SPCA about cat abuse. These two (cats) have the SPCA on speed dial.

As I was leaving, Hoppy came up to say good by. Hoppy's dad rescued him from the pound and sadly, he had a "dead" leg. No one else wanted him when they found out about his leg, but his dad took him home, got him fixed up, and now he's a three legged trout dog. Hoppy came and sniffed each fish I caught to make sure it was OK to put it on the stringer. He particularly liked the big one. 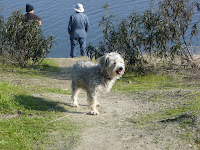 Nothing on lures today. All on PB. I did get a video of an Osprey, but I wanted to get him diving on a fish. Do you think he'd cooperate? Oh, hell no.
At press time, I'm having a little trouble getting YouTube to upload it, wander over if you get a chance, it might be there.
http://californiadreaming-shoreman.blogspot.com/
That's it for Tuesday. Till next time.
Mark
Posted by Mark Kautz at 3:01 PM