Personal Best - It's A Tie

On the way home on Wednesday, I realized I still had my fishing license around my neck. So I took it off and threw it over my shoulder into the back seat of the truck. Yesterday morning I unloaded the truck and my license was no where to be found. I had stopped at Bob's to drop off the fish and thought I might have dropped it there. I went and looked. Nope. Might have dropped it when I put the trash can out. Nope. Missed it when I unloaded the truck? Nope. Emptied the truck. Nope. Checked my fly vest to see if it got caught on it. Nope. Went back out and unloaded the truck again. Looked under the seats, between the seats, under and in the console, in the glove box, behind the seat in the back, in the bed. Nope, it just wasn't there. Even went as far as calling the resort at Lake Amador (they hadn't seen it) and driving out to the lake where I had parked. Nothing. I was baffled. It was turning into one of those Twilight Zone things. I threw it into a black hole.


Next option is buy a new one. I wanted to meet Yuki at the lake this morning and that was the only option I had. Now that the DFG is electronic, no buying it twice. Says you already have one. What do they know?


Anger sets in and I storm out to the truck again. Takes a lot to piss me off, but I was this... close. Unloaded the truck again. Still nothing. Re-looked at every nook and cranny and it just wasn't there. Where the hell could it have gone?


As I was backing out of the truck, I looked once more at the little "back" door and in the little storage slot in the door, I noticed a bungee cord. Stuck my in the slot and low and behold, there it was. It was leaning against the outside of the door and could not be seen from looking in. What are the odds of throwing my license over my shoulder, into the back area, and having it fall in that little slot in such a way that it disappeared? From now on, It hangs in it's spot on the hanger hook, in the back window, ALWAYS.


Which brings us to the title. Got to Lake Amador at 0845, put out one rod with a slip sinker rig and Rainbow Power Bait. The other rod with a "Brook Trout" colored Kastmaster. Yuki was fishing on the other side of the spillway using the method he learned on Wednesday. Almost immediately caught a little 10" Rainbow. One of those DFG planters. Unhooked and back out for another day. The outlook for the day was good. But, from then on, it was NADA.


Around Noon, I moved over to the open lake side of the pennsula I was on and put out the Power Bait. Continued to throw the Kastmaster to no avail. Decided to try something else. My friend Rich (of Rich & Mark) uses a Rapala a lot, so I put on an F-11 in Firetiger. I got a good pass from a fairly large trout, but no hit. I cast out again in the same area and half way in, the fight was on. Once in the net, I realized I didn't have my camera, so I put him (notice the Kype)on the stringer for a few seconds while I ran up the hill to my truck and grabbed the camera. Snapped a shot, unhooked him, and he was off to be caught another day. Did get a scale reading on the handy dandy Berkeley Digital Scale and he went 4 lbs 12oz. A tie with my personal best at the Trout Pond last year. Short of filling him with sinkers, thats all I could get out of him. One ounce more would have been a new personal best and one resolution for 2011 completed, but it will have to wait for another day. 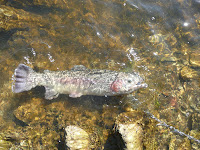 Excuse the bad picture, but I wanted to hurry and had already let him go when I saw the shot was not very good.

So, another good day at +Lake Amador and I almost put this lake on my list of lakes I didn't want to fish any more. Just goes to show you. Oh yeh, I entered the derby. Ran into the guy (Ralph)that works at Lake Amador and he said my tag from Wednesday probably would have won something nice. I guess, by my own stupidity, I'll never know what that was.