Decided to head out to Lake Amador yesterday. We were in between storms and I wanted to see if there were any more of those big fish still there. Got there at 0830 and checked in. The cost of fishing Lake Amador ($17.00) doesn’t look so bad now that the Camanche Trout Pond has upped its fee to $15.00. While I was checking in, the woman at the counter asked if I wanted to enter the derby. I told her I didn’t because of the experience I had at Bear River Reservoir fishing a tournament a couple of years ago. “Only $5.00 to enter”. Sorry, bad feelings about tournaments.


Went to where we fished last Friday. What a difference in weather. Last Friday I was freezing. Yesterday I was fishing in a tee-shirt. Started with a walk across the spillway. Last Friday it had water running across it and yesterday, dry as a bone. Tried a little sight fishing with a white Wooly bugger I tied on Tuesday night. Didn’t see anything on the surface and I think the problem was the sun was coming up causing a glare on the surface. Have to wait for the sun to get over head to see the fish better. Went back to the truck and got my spinning rod and fished the red Sonic Roostertail across the spillway, around the point, and back across again. No takers.


About that time my friend Yuki (met him at the trout pond a couple of weeks ago) showed up. So we set up on the other side of the parking lot, opposite the spillway. We fished Power Bait on a slip sinker rig and threw out a couple of Kastmasters. Mostly just sat around and talked.


Walked back over by the spillway and noticed that the sun was up far enough to see fish swimming around just below us. Us being myself and another Mark (getting to be quite a group of Marks) I had met previously at Bear River Reservoir. I went back to the truck, rigged up my fly rod (I really wanted to catch one of those big trout on my fly rod) and zipped back to the hill. Out went the white Wooly Bugger. Nice cast, put it about 10 feet beyond the fish, and stripped it right by him. He just turned his nose up at it. Can a fish do that? I asked that before and nobody seems to know. Then out went a Thinmint and then a black Wooly Bugger. They weren’t having anything to do with flies yesterday.


Now it was time to get serious. From the bluff (I’ll use that term to describe the spot that is about 10 feet above the water) I put out one rod with Power Bait on a slip sinker rig. Then I tried the red Roostertail to sight fish the ones cruising by. No interest in the Roostertail and the PB just sat there. Took one more trip back across the spillway and managed to lose my brand (crap) new red Sonic Roostertail on a rock fish. You know, those gray ones attached to the bottom. Good thing I had a backup.


Back to the bluff and back out with the PB. By now it’s getting on to about 11:30 and we’re sitting there, fishless. This is not looking good. I’d be happy with one, just so I don’t get skunked. Then my line went straight. Mark thought I had his line, I thought I had Marks line, and we started to reel in. His came in, mine has a fish on. It weighted 3 lbs 15 oz. (see the picture below, bottom one) OK, I’m happy now. Once landed, we noticed that the fish was tagged. Remember the tournament I mentioned (and didn’t enter), well…………


Caught a few more that were small on Power bait and Kastmasters, and then during one cast, I hooked one that immediately snapped the line. Kiss that Kastmaster goodbye. Mark saw it jump and guessed it was better than 5 lbs. Damn; it was one of my best Kastmasters, the gold one with the red and black dots. It was in the Brook Trout color. Fortunately I had a backup, actually two. Pays to be prepared.


Up to the truck to get the Kastmaster, tie on a snap swivel, and back to the bluff I went. The next fish in was 2 lbs 15 oz (in the picture below also, top one) on the Kastmaster. 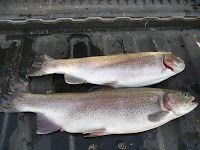 About that time, I see Yuki across the spillway talking to one of the guys fishing over there. Yuki starts fishing and the guys head back across, calling it a day. I’m still on the bluff casting my little heart out when Yuki looks like he has a fish on, good for him. A few minutes later, I see him walking across the spillway holding a fish that’s almost down to his ankles. Turns out to be the biggest fish he’s ever caught. It weighed in at 4 lb 13 oz. He was on the “jazz”. The one I caught on Friday, the two big ones today, and the one Yuki caught are all Cuttbows, a cross between a Rainbow and a Cutthroat. Amador is famous for this fish.


I caught one more (see the picture) that was colored in a way that we weren’t sure what type of trout it was. One opinion was that it was a Kokane, another said it was just a Rainbow, so I took a picture in hopes that I could get some help identifying it. 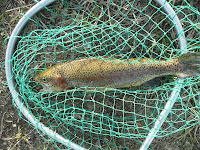 Yakked a bit with one of the guys from Lake Amador (he convinced me to enter the tournament since it runs through April) about the fish in the lake. He claims that the fish are getting too big. How can you respond to a claim like that except to say “Aaah, too bad, guess we’ll just have to catch them”.


That’s it for today and to think I almost quit fishing this lake. Go figure.