I've been down on the Lake Camanche Trout Pond for a while now. I lambasted them both here on December 30th and in the local new paper on January 7th about the bird problem. Well, I have to tell you, the pen (in my case the key board) is mighter than the sword. They have stopped stocking the Trout Pond, at least for now, BUT they aren't telling people this. Over the weekend, I understand that the pond was packed and NO ONE was catching any fish. What is wrong with this picture?????

I've been hearing some rumors about fishing being good from the North Shore, so I went there. I had no idea where to fish, so when I checked in, I asked. "Go to the day use area and try there. If there are too many people, go around the bend and fish the point". The day use area was low enough that you could drive right to the water and park where you were fishing. That's cool.

Set up one rod with Rainbow Power Bait and the other with the usual assortment of Kastmasters, Thomas Buoyant Lake Lures, and Little Cleos. Lure didn't produce anything. The five I caught were all on Power Bait. They were spread out from 0900 to 1300, but 5 in that time period was good enough. They turned out to be 10" - 11" chunky little Rainbows. They are almost silver in color, but when you get them into the sun, you can see the pink. 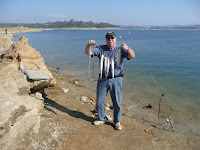 I've got a couple of pictures I'll post on California Dreaming over the next couple of days, so stop in and take a look. Here's the link.
http://californiadreaming-shoreman.blogspot.com/
A very nice day to be at the lake. Sunshine, blue skies, and about 70 degrees. I know it won't last, but I'm enjoying it while it's there.
Till next time.
Mark
Posted by Mark Kautz at 2:53 PM