I wanted to fish Lake Pardee on opening day, last Friday, but due to circumstances beyond my control, today was the first chance I had to get out there. Some years ago, there was a Parkay Margarine commercial that that went something like this; ‘It’s not nice to fool Mother Nature”. Well, if you live upcountry you know, somebody fooled Mother Nature, because her wrath did fall upon us.


Friday morning, as you know, I awoke to 18 inches of snow, three trees down across my driveway, and no electric power, which lasted 94 hours. When it finally came back on Monday afternoon at 4:50pm, I got the chance to clear up all the chores that accompany you when you are without electricity so I could head out to the lake.


I did find out that the reason for the long delay getting power back, was the place where the line went down. PG&E didn't find it until their helicopter flew over and found where it went down. To the West of where I live is a canyon where a tree fell and took out two power poles. It was in such a place that PG&E almost had to make a new road to get to it. That, the snow, and the fact that it was right by the stream bed (water kept filling up the hole for the new pole), made it more difficult and longer to repair, than one would think.


Back to fishing Lake Pardee. 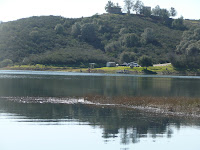 This is a "cross the lake" view of the "mud hole" at Lake Pardee.
When I got to the lake, I talked to the girl at check in and the guy at the marina and found out what happened on opening day. Here it is in a nutshell. The lines were long at check in, the place was crowded, and very few people went home without fish. I inquired where the fish were being caught today and was told that they were moving out of the coves and into the lake.
I stopped at a little island that is accessed by a wooden foot bridge to see if anyone was catching anything. The answer was a firm “no”. I spent a few minutes casting my white grub jig and had to agree, nothing there. Then I drove over to the Jackson Creek Spillway and fished there.
There were quite a few people fishing from the shore and several boats trawling the area. I talked to several people fishing there and they said one or two were caught. I found a spot, put one rod out with Berkley Power Bait on a slip sinker rig and on the other rod I used several colors of Kastmaster. Within 30 minutes, I had a chunky Rainbow on the Power Bait that went about 12 inches.
I also have to note that this is the first fish I’ve caught at Lake Pardee and it wasn't a bad size. 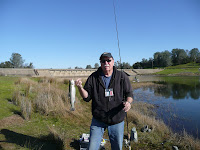 I fished from 8:30am until 11:30am and landed five chunky Rainbows in the 11” to 14" range which was my limit for the day. Others around me caught one here and one there on slip sinker rigs, and I have to think that, again, the 4lb Fluorocarbon leader was the key to catching the fish. Packed the five in ice and dropped them by Bob's on the way home. Hey, I got my driveway plowed.
I've got more pictures and if you want to take a look, stop over at California Dreaming.
Till next time.
Mark
Posted by Mark Kautz at 2:03 PM