I never thought I'd be happy to see rain, but today I am. Another storm came in last night and it's a high snow level storm. The rain is actually melting some of the snow we still have on the ground. I'm not sure if that is good or bad. Now I'm starting to see all the trees that are down and all the cleaning up I'm going to have to do later.


Yesterday I drove out to Lake Amador with the Float Tube Cumberland in the back. It was supposed to be near 60 degrees, but was 27 degrees when I left the house. I had high hopes, though. When I got to the lake it was cool and a bit breezy, so after check in, I drove over to the point by the spillway. Couple of guys from Sacramento already had three on the stringer in the 3 lb range. The outlook was good.

One rod out with Power Bait and the other with Kastmasters. Two hours and nothing. Not even a drive-by. They were fishing in the spillway, I was fishing out in the lake. At 10:00am, I packed up my gear and went over to the launch ramp to put in the Float Tube Cumberland.

In a previous post, I showed you a picture of the stock truck across the lake. See below. 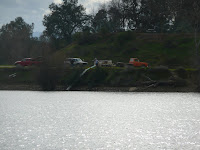 Well, yesterday they used a different method to stock. A kind of square, bulky boat of sorts to ferry the fish out to the dam area. I was already afloat and tried to keep up , but you can only flipper so fast and he pulled away. I wanted to get a picture of him dumping the fish, but it just wasn't to be because the second time he came out, I was on the other side of the lake from where he was. Sometimes you just can't win. 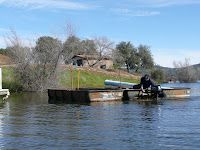 I fished Wooly Buggers in assorted colors, Thin Mint, and grub jigs in a couple of colors on my lake fly rod, but couldn't even get a bump. When it started to get windy, I decided to wrap up the float tube thing and head back to the launch ramp. It was a lot faster going back (with the wind) than it was going out (bucking the wind) but a lot easier casting on the way out with the wind behind you.


After I stowed the float tube away, I drove over to the dam where Rich and Mark were fishing. they already had 2 or 3 on the stringer and had released a couple. I set up one rig with Power Bait and promptly list my rig to the rocks on the dam. I stayed with lures the rest on the day. Used Kastmasters, Rapalas, Sonic roostertails, and grubs. The only action I saw was one drive-by and one that hit right next to the shore, on Brook Trout colored Kastmaster. The score was fish 2 Shoreman zip.


Called it a day at 2:30pm and drove into town to run a couple of errands. Always good to work your errands into a day of fishing.


That's it until the next time. Till then.