Things Are Back To Normal

Picked up my truck yesterday afternoon. They did a really nice job repairing it. Just to remind you what it looked like, here are the "before" pictures. 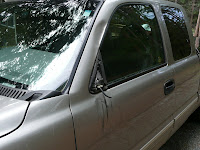 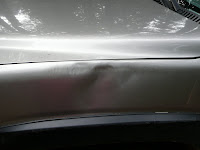 Here are the "after" pictures. Nice, clean, repaired, and shiny. 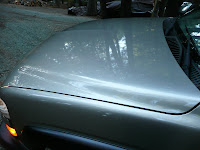 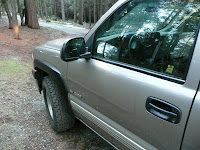 So, what is the first thing I do? Go fishing of course. I had three options. Amador, Camanche, or Pardee. Note they are in alphabetical order as to not give any one preferential treatment. Not knowing which one to go to, I flipped coins and used the odd man out strategy. Two tails for Camanche and Pardee and heads for Amador. Packed up the truck and headed out to Amador.

Fished the point by the spillway with Power Bait on one rod and Kastmasters (several colors) on the other. Water was murky brown and filled with debris. Most of this, I suspect, was from the rains we've been having, although the spillway was not overflowing very much. Nothing on Kastmasters. Fished the white Crappie jig. Nothing. Fished an F5 Rapala and an F7 Rapala in firetiger. Nothing. Check with several passing boats. Nothing. Guys along the shore, nothing.

After a few hours I decided to go fish the dam. I don't particularly like the dam because you can't fish Power Bait on the bottom as you get snagged on rocks almost immediately. Here, again, there was a large amount of debris so I passed and drove over to the Carson Arm and used the same as at the spillway. Again nothing.

No fish, but the day was not a complete loss. When I fish, I always have one eye on the rod with Power Bait, one eye on the rod I'm using for lures, and one eye searching the area around me for "stuff". One eye I keep in reserve in case something interesting happens on the lake.

Here is a list of the things I found today.

1. A big wad of fishing line that looked like it was 30 lb test. I'm not sure if it was lack of knowledge, or delusions of grandeur. I also picked a big wad of, maybe, 4 lb test. Threw both into the trash can.
2. Two bobbers. One white and red, the other yellow and florescent orange.
3. A couple of sinkers.
4. A couple of huge snap swivels.
5. Some kind of spring, bead, plastic something or other, kind of hookup thingy.
6. A white grug jig with a curley tail.
7. A 1/8th oz Kastmaster in the Brook Trout color.
8. And last, but not least, yes ladies and gentlemen, a GOLF BALL. A Top Flite XL, white with a red stripe. What it was doing half buried in the hill side I can't even begin to speculate.

Almost as much fun as fishing. Almost. Well, that's it for today. Just in case you haven't figured out the 4 eyes thing, I wear glasses. Old four eyes and all that. Also keeps you wondering. Next week, up to Ice House Reservoir. I'll let you know how that turns out.