Today is Saturday April 30th, 2011 and it’s opening day of the general trout season in California. As I wrote in the post last Wednesday, I wandered out to Angels Creek in Angels Camp, California. I had expected the place to be packed. What I found was an almost empty parking lot. That was a surprise. 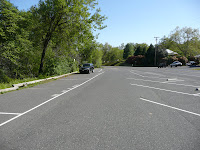 The time is 0830. The creek is surrounded by a lot of trees, so I decided to take my Okuma 6’6” rod with 2 pound test and a small Panther Martin in gold with a black body and walk the creek just to see who was there and what was being caught. In one of the pools I passed, you could see the trout holding is the quiet water.

Double click on the picture and you should be able to see the fish. 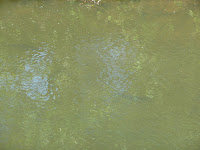 I came across a gentleman using a Tenkara setup. He had caught 4 fish already and was working on #5 as I passed. Mike at Troutrageous, this picture is for you. 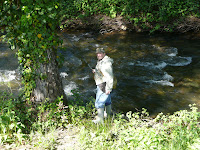 I walked up as far as you were allowed to fish, to the Utica Power Station and did an about face and started back. I stopped at the first pool I came to and a gentleman was fishing with Berkley Gulp Trout Dough (looked like white) and hooked one as I was standing there.

After his fish was landed, he and I got talking and swapped cards, mine for the blog and newspaper, his for his limo service. Noticed the name on his card was Joe Teixeria. Last name look familiar? Joe is the cousin of Mark Teixeria, first baseman for the New York Yankees. Small world out there.


I kind of dabbled while Joe was still fishing and when he left, I put on a #18 gold treble hook, split shot, Rainbow Power Bait and tossed it into the hole. It wasn't long before I had a hookup. It fought, it jumped, and it came upstream. I thought I'd hooked into a 10 pound trout. Then I saw it. Maybe 2 to 3 pounds, but hooked in the tail. Must have taken the bait, spit the hook, and then got snagged. Well, once it saw me, it was gone in a shot. My only hope was to break the line because this trout was going down stream at about 100mph. After I tightened down the drag and the fish made it about 150 feet down the creek, the line finally snapped.

I re-rigged and shortly there after, I landed this one. It went about a pound and a half to two pounds. 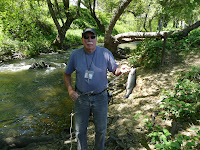 For the next couple of hours, I had bite, after bite, after bite and couldn't get one to stay one the line. A couple of guys joined me at the pool and soaked Power Bait, threw Panther Martin's, and put a few on everybody's stringer. I had one hit and it was big, but snapped the line. Shortly after that, the young man standing next to me landed the fish below. Weighted in on the handy dandy Berkley Digital Scale at 3 lbs 4 oz. I think that was the one that broke my line. Pretty sure it was. Looked just like that one. OK, probably wasn't, but one can wonder.

Turned out to be a bit slippery. 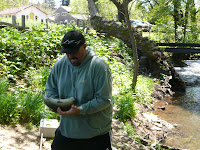 Then he got a good hold on it for a good photo op. 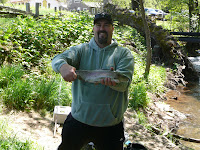 I hung around for another hour or so, then called it a day. I would say that the rumors of 16" to 20" trout in the creek was correct. And yes, there are still a bunch there. Might just have to wander out there next week after everybody has to go back to work. I'll let you know.