A Sad Ending To A Crappy Week

Just a quick post to let you know of sad tidings in Volcano. Late last week, we lost one of the girls next store (from a post on California Dreaming) to a Mountain Lion. I don't know all the details so I can't pass anything on. A sad day. She'll be missed. 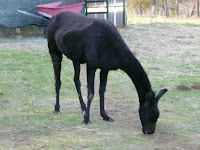 Last Sunday I posted about our little boy Smudge going to the vet emergency room and being diagnosed with asthma. it turned out to be more than just asthma. Thursday afternoon I had to take him again to the Vet with breathing problems. I had left to run over to the hardware store in Pine Grove (about an hour round trip). When I left, he was fine. When I returned, he was laying in the hall barely breathing. I got him to the Vet and she was concerned that the strong doses of medication he was getting should been enough to stop any asthma problems leaving her to think that he was much sicker than we thought. We had the option of taking him to Sacramento to get an EKG, but the Vet didn't think he would be strong enough to make the trip. If the EKG came out that he had heart trouble, he would have had a short life on many medications. If he didn't, he would have had a slightly longer life, again on many medications. The only diagnosis the Vet could give us was that he was a very sick boy and would probably not get better. It would not have been a very good life. We decided that it would be best to end his suffering. We miss him very much. 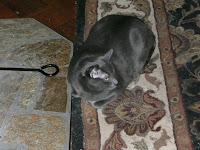 Tomorrow I'll tell you about the May 15th snow storm.