Back on November 19th, last year I did a post

of Roy (my neighbor ) and I fishing. It was a humorous writing because the photo's were done on different days, but I thought it would brighten your Friday.

Yesterday our plan was to head upcountry and try a lake or two up there. When we got up, it was still snowing at 4000 ft which made it a waste of time to go up there. So we drove down to town, stopped at the donut shop for coffee (and donuts) and headed for Angels Creek. DFG was supposed to plant again this week.

I aimed for the usual hole, only to find 3 guys already taking up the good spots. One, in fact, was Casey who caught the 3lb 4oz one (was probably the one I lost) on opening day. He already had 4 on his stringer. This was about 0830. The outlook was good.

Roy and I wandered down stream looking for a hole that we could fish. Came across one with only one guy and asked if we could join him. He was fishing in one spot and there was a few other places we could put in some Power Bait. We fished for about a half hour and didn't get anything and then the stock truck arrived. He dumped 4 buckets of fish right into our hole.

Nothing happened for about an hour. Then Roy landed the first one and the second one. He was making me look bad. You know me better than that. I was there for Roy to catch fish and catch fish he did. I did catch the next one. Between 0930 and 1130 we each landed 5 (a limit). Take a look. 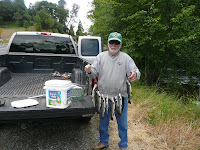 You have to remember that as old and grizzled as he looks, he's still in training. I guess his training paid off since all I did was set up his rod with a #18 gold treble hook, a little split shot sinker, and off he went. I know there are only 9 on the stringer, but I gave him credit for his 5th because I should have gotten the net, but just old him to yank it up on the bank. Hook came loose on the yank.

I put some more pictures of the creek over on California Dreaming (http://californiadreaming-shoreman.blogspot.com/) so take a look.

The day was sunny with some clouds moving through. Maybe low 70's and t-shirt weather. Just as we were leaving, it started to sprinkle and by the time we got home, it was raining, so we hit it just right. Roy's happy with fish for dinner that he caught and Bob's happy because he got some for his freezer. I'm happy because of both.

That's it for this adventure. Will try again next week and maybe take a run upcountry.