Had to make a run to Sacramento yesterday and decided to hit the American for Shad while I was there. Went to our usual place and parked just as one of the drift boat guys came into the lot. He said they caught a couple.

I got wadered up, got my vest on, strung my fly rod (the one with intermediate sinking line) and grabbed my spinning rod (just in case) and set out for the river. The release was jacked up about 2000cfs (7000cfs) more than I like it (I like it at about 5000cfs) , but I gave it a shot anyway.

Got to our spot and it still looked OK, like the picture below. A tad deeper, maybe. 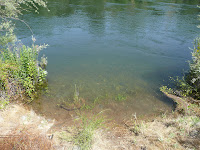 Tied on one of the Shad flies I got last year and commenced to cast. I'd strip out some line, do a roll cast to get the fly out a ways and then a double haul to get it out farther. Once I determined where it would land, I'd let it do it's thing and then strip it in. While it was doing it's thing, I'd pull out a couple more strips of line and the next cast would put it out a little further. That's the only way you can attempt casting in an area that's about as wide as your bedroom hallway.

The fourth time I'd add line, the cast would put the line out, but there was no fly on it.

See that little bush in the upper left hand corner of the picture below? Well, that was last year. This year it's about 1/3 bigger and I noticed as I looked for the fly, that it's a holly bush (thorns on the leaves) of some sort. A great fly eater. Now you have to know, that the flies I was using were, florescent pink and florescent orange and could I find them? Oh hell no. I looked for 15 minutes right where they should be. No such luck. 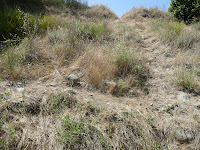 After losing several flies, I put up the fly rod (note to self: find some place to fish where you have space behind you) and got my spinning rod with that pink grub that works so well.

After 2 hours of standing in the river waving a stick, my back started cramping (from a back injury a couple of weeks ago) and the fact that I can't stand on my feet for very long without my back hurting anyway, I called it a day. And yes, I went home fishless.

I think there were several factors involved in why I didn't catch any fish. One, the river was high, I couldn't stay very long, and the river was too stinking cold. I had wool socks on my feet and they still froze. Could be we could use a little warm weather too. Could be I just got skunked, although I got an email from Rich (of Rich & Mark) and they think the water temp has something to do with a slow bite. Who knows, only that I will be back again soon.

At least I got out. Till next time.