All's Quiet On The Upcountry Front

Since the 4th weekend has passed and most of the hoard has gone home, I decided to take a drive upcountry and soak some Power Bait and drown a couple of night crawlers.

My main goal was to walk over to the sandy side of the spillway at Caples Lake, park my keister on a rock, and put out two rods, one with Berkley Rainbow Power Bait on a slip sinker rig and one with a night crawler under a bobber.


I parked in the lot below the spillway, grabbed my gear, and walked up the hill. I was not expecting to have to crawl over 3 foot high piles of snow on the way through. Come on, its mid-July, but a fisherman has to do what a fisherman has to do. The lake level is going down. The spillway was overflowing in a big way when I was up there last week, but today it was just a trickle. This is good in two ways. One, it will make it safer if you want to put in a kayak or float tube and two, if you fish Silver Fork Creek (like I do later in the year), it will be a slower and safer water flow.


This is a little shot of the surrounding hills. Got snow? 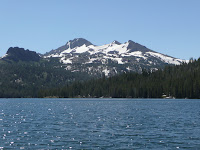 I found a nice little cubbyhole under a tree, put out the two rods and let the fish do their thing. In this case, it was their nothing. Then the wind started blowing. I had expected the wind to blow. I anticipated the direction it would blow from so that my back would be to the wind and I could fish calm water. Nope, it blew right into my face and kept pushing my bobber back to shore.

OK, plan B. I packed up and drove over to the other side. Set out my two rigs with the wind behind me. All was well and a 10 inch brown decided that my night crawler would be lunch. Got him in, snapped a picture, and put him back for another day. I think this was the same brown I caught last Tuesday. Really, like Tweety Bird and Larry Bird "They looked an awful lot alike". Ok, if you've never seen the commercial, forget it.

This is across the lake just above where I was first fishing. I believe they call the snow on the top, a cornice. This is the kind of stuff that when it breaks off, causes an avalanche.

Double click on the picture and you can see it better. 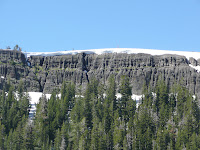 After a couple of hours of wind in my face, I packed up and drove down to Bear River.

Since ice out, the upcountry lakes have been extremely slow. I don't know if it was the long winter, the water is still too cold (I keep forgetting my new Handy Dandy William Joseph point and click thermometer), or the fish have that "stick your nose up at the fisherman" thing down pat. Any way you look at it, it's a challenge.

Thursday I'm off to Sacramento to try and catch a shad or two before they are all gone. The water in the American River has been running so high, that it's not been safe to go near it, let alone stand in it, to fish. Yesterday is was at 5200cfs which is just about right. I'll let you know how it turns out.