A New Place To Fish

Some time ago I won a contest that Rebecca (Outdooress) put on and had the option of two or three different prizes. I picked this picture that was done by Joel over at "A Year On The Fly". I had it framed and have already sent Joel a thank you (yes and Rebecca too), but didn't show you guys what it looks like, so here you are. I have to tell you, it looks great hanging on the wall in the nerve center of Northern California Trout. I love it. 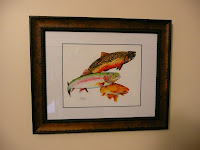 Yesterday my plan was to drive out to a lake I haven't fished before. I've been watching the planting schedule and as the DFG plants Angels Creek they have been planting White Pines Lake too. I hit the road at 0730 when my wife left for work and by the time I stopped at Starbucks for coffee and a coffee cake, I managed to get to the lake around 0915. It's a rather long drive out there.

I took 15 minutes or so to do a recon of the lake and see where the best place to launch the Float Tube Cumberland was. Turned out that the best place was right around the corner behind that bush over there. There was a concrete launch ramp and all.

Got the Float Tube Cumberland in the lake and did a 360 taking pictures for future reference. Here are a couple so you can see what the lake looks like. 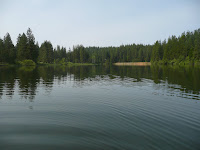 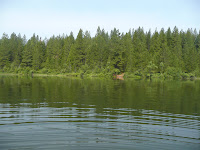 The one thig I noticed is that the weed bed on the bottom was only two feet below the surface. Was this going to be another Mather Lake with every cast coming back with weeds on it? No, it wasn't. Once I got out a hundred feet or so the lake deepened and the weed bed faded into the sunset. Ok, maybe there was just more water over it.

Since this was a new lake and I didn't have any idea what to expect, I figured I'd put out a mini-crawler under a bobber and pull it around the lake behind me while slinging a Tungsten Beadhead Thinmint on my lake fly rod. Hooked up the crawler and laid the rod across my lap with the bobber and crawler in the water. No sooner had the crawler hit the water, the bobber started going under. I hadn't even had a chance to pick up my fly rod and this lunker was hooked. 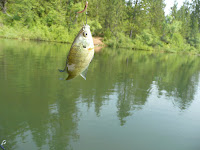 Now, if the hook I was using was a Mustad Super Marlin hook size 14/0 that would have been a REALLY BIG, what is it, a Crappie, A Blue Gill. Something like that. As it turned out, the hook was a size 6 bait hook (all I had with me) and the fish was only 4 inches long.

Ok, I wanted to do some fly fishing so I put the spinning rig away and continued with the Thinmint. As I was flippering out across the lake I noticed I had a following (all bloggers like to have a following), but in this case it was a bunch of those little, what ever they are. I dug into my nymph box and put on some little gray nymph of some sort (I have so many of those things I can't keep up with what they are named) under a Thingamabobber and they murdered it. Then everything stopped because I flippered away from the school.


After messing around with those little guys for a couple of hours, I got back to trout fishing. I noticed that most of the people fishing were over by the dam, so I flippered over in that direction. Talked to one guy on a pontoon boat and he said those fishing on the bottom were catching a trout or two, but that was it. Could be that the water was too warm near the surface. I did take the water temp with my Handy Dandy William Joseph point and click thermometer and it was 70 degrees. Just a tad warm for Rainbows.

By then it was getting near time to put on the old feedbag, so I turned around and headed back toward the launch area. I fished the Thinmint on the way back and got a couple of good hits although I don't know if it was trout or those little, what ever they were.

On the way back to Angels Camp and Mickey D's, I stopped at Angels Creek just to see if anyting was happening. I came across one guy fishing at the pool at Tryon Park and he was not getting anything, so rather than wasting time at the creek, I went to lunch and then went home.

I'll be back to White Pines Lake, if for no other reason than to fiddle with those little, what ever they are. They are a blast on a fly rod. Might even sink to putting a crawler on a #10 bait hook on my fly rod.