Smoking Trout One Fish At A Time

Early this morning I checked a couple of the local forums to see if anybody caught anything over the weekend. Since I was going to make a run up the hill this morning anyway, I figured I should find out if anything was happening.

One particular forum showed a bunch of pictures of BIG Rainbows being taken on the West Fork of the Carson River.

Plan A - Drown some crawlers in the West Fork of the Carson River. If nothing happens, take a run up to Upper Blue Lakes and soak some Power Bait. If all else fails, stop by Red Lake and see if the Brookies are biting yet.

Always good to have a plan until you run into that damn construction on Carson Pass. Last time it was 10:00am until 1:00pm and hang out until the stop light turns green, then jet through. Not today. Now it's from 3:00am until 12:30pm and 2 hour delays while they blast rock to do, what? Avalanche control, falling rock control, screw with the fishermen, who knows. When I got to the pass, the line of cars waiting for the flag guy was about 20 deep and didn't look like it was going to be moving any time soon. You get this impression when the drivers are walking around their cars with that 1000 yard stare.

Plan B - Take a stroll down to where the creek out of Woods Lake runs into Caples and fish for Brookies. Parked, grabbed by Okuma with 2 lb test, my tackle box, and my net. Started down the hill, and down the hill some more, and further down the hill until I could hear the creek. The further down I went, the more I became concerned that I would be able to walk back up the hill. I calculated I was about half way down when I turned around and went back to the truck. I was weezing and gasping for breath when I got back up the hill. Good thing I didn't continue down. Man's got to know his limitations (Clint Eastwood - Magnum Force).

Plan C - Fish Caples Lake. Good thing I have backup plans. 0830, picked a spot on the highway side where I had caught fish in the past (there were a couple of guys fishing the dead tree) and set up one rod with Power Bait on a slip sinker rig and my Okuma with a crawler on a #6 bait hook, no weight. Proceded to get the crawler caught in the rocks, so the next one went 30 inches under a bobber. About 0900 I got a good bite on the crawler, but missed the hook set, so I tossed it back out in the same place and within 30 seconds a 13" Rainbow was on. I got one other hit a little later, but it, that was it. Pulled out just after Noon.

Took this shot of the hills behind Caples. Keep in mind that today is August 29th and there is still snow on the tops of the hill, OK mountain. A very rare occasion, indeed. 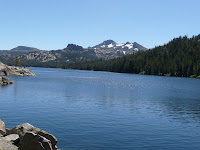 So, now I have 4 fillets in the freezer as I continue to collect enough trout to smoke, one fish at a time. It would be OK with me if we could speed things up a bit, hint, hint, Oh Great Fishing Gods.

Think I'll try Bear later in the week since it's just up the street. Let you know.