I had plans to make a run out to Rancho Seco Lake yesterday, but circumstances beyond my control, prevented me from getting there, so I headed out there today.

Since I had so much fun with the little Crappie, Blue Gill, what ever they were, up at White Pines Lake, I wanted to try for some on my fly rod at Rancho Seco Lake. There are rumors that record size Crappie lurk in the lake. I wanted to find out if there was any truth to the rumor.

I launched the Float Tube Cumberland at 0830 next to the dock in the picture below. 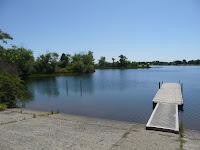 I did the usual worm under a bobber to locate the school and found them in the cove to the left of that point you see off the end of the dock. As soon as I did, I put on a black gnat with a red tail, that I had tied, under a thingamabobber. They seemed to like that and I landed and released several. Now was the time for the black gnat that Bill Trussel (Fishing Through Life) sent me. Damn if they didn't stick their noses up at it. Sorry Bill, but I keep trying. It's hard to understand how they will take one fly and ignore another that looks almost exactly the same. The ones I caught were in the 4" to 6" range, but nothing that would lean toward a record.

My next thought was to work the reed bed on the right side of the dock area. That's the picture below. 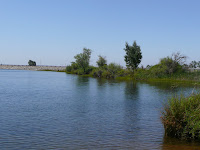 I fished all the way from the dam back to the dock and there wasn't a thing there that resembled a fish. Go figure.

I did use the Handy Dandy William Joseph point and click thermometer to check the temp and it varied from 70 to 73+ degrees. It actually got a bit warm in my waders, but I'd be hard pressed to flipper around all that growth on the bottom with out the waders on, because some of it is just inches below the surface. Last thing I want to do is have my bare legs in that gunk. You become a weenie when you get old. No booing or hissing please.

Well, no record Crappie today, but a bunch of fun catching those Crappie, Blue Gill, what ever they are, on a fly rod. I'll be back to try another part of the lake on another day.