A Day In The Life

Today is Friday September 23rd, 2011 and this is a day in the life of Shoreman. The wife is off today so what should Shoreman do? Go fishing of course. It's a two fold idea. One to let the wife be home with out my smiling mug around and get out to the lake, since I've been housebound for the last week with a remodel of the kitchen floor.

0545 - Rolled my lazy butt out of bed. Turned on the coffee maker and ate a bowl of cereal, a banana, and took the necessary medications I do each morning.

0630 - With a commuter mug of coffee in hand, kissed the wife goodbye and hit the road. On a side note, it's still a bit dark at 0630 in beautiful Volcano (not downtown, we're up on what's called Shake Ridge).

0715 - Got to Carson Pass and was only held up about 2 minutes (remember the 2 hour delay because of blasting rock was still in effect).

0745 - Parked my butt by the lake with one rod out with Power Bait (as usual) and the other with 1/4 ounce Kastmasters. There turned out to be no interest in Power Bait nor with 1/4 oz Kastmasters, so I changed to my Okuma with 2# test and 1/16 oz Kastmaster in silver. Between 0745 and 0845 I landed two small (about 6 inch) Cutts and had two hit and runs. A little photo of Red Lake for your enjoyment. Looks pretty much like all the others I've taken during the summer, huh? 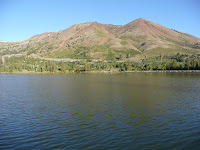 0900 - Wandered over to the West Fork of the Carson River where Highways 88 & 89 meet. Been some big Rainbows taken according to the local forums, so I thought I'd give my Okuma and a 1/16th oz Panther Martin a shot. From what I could see, it looks like the stock truck comes and dumps right under the bridge and combat fishing occurs. There is a hole right by the bridge and as far as I could see, it was the deepest part of the "river". The rest of the "river" is around 2 to 3 inches deep. Waste of time.

0930 to 1030 - I spent driving on some pretty good 4wd roads trying to find a place called Scotts Lake. I went as far as I felt safe driving and turned around at a creek washout that was too deep to try and get my truck across. It was by dirt bike or horse from there.

1030 to 1040 - Waiting for passage across Carson Pass blasting area again. Ten minutes wasn't too bad. Could have been two hours.

1:15pm - Note I've gone off military time. Packed it up and called it a day. Stomach growling and in need of sustanance. A view of Caples from where I parked my truck. Note that it is September 23rd and there is still snow on the mountains. 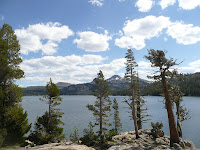 1:30pm - Caples Lake Resort Store for Diet Coke and Famous Amos cookies. They don't have a lot of stuff for consumption.

2:15pm - Stop at Bob's for a bucket swap (drop off the fish and get an empty bucket for next time).