Not those kind, get your mind out of the gutter. I've got nightcrawlers. Real live ones. This time I checked and made sure they were alive. So, 0730 and I'm off to Silver Lake to catch those big ones that are biting on blown up nightcrawlers.

Got there about 0815 and with sunshine and blue skies, the outlook was good.

Did a little more research and thought I'd try the West Lake Road. Nice road, nice cabins, no access to the lake. Back over to the East side. Now everybody (maybe one or two people) said to fish the inlet. Ok, have no idea where the inlet is, but maybe somewhere on the East side? Got to that side and all the access points are nice sandy beaches, that are about a foot deep, out 100 yards or so. Great if you're swimming, lousy if you're fishing. Kept going and came across a small (truck width) road I've not been on before. Follow it to the end and there's a nice parking area with another truck and three guys getting ready to walk down to the lake and fish. "Good place to fish?" I ask. "Yup". "Mind if I wander down and drown a couple of nightcrawlers?". They turned around and walked away. Didn't even answer. Friendly sort, they were. Must be that undesirable fisherman thing.

So I grabbed my gear and walked down to the lake. It was about 1/4 mile across big boulders and some scrub brush. I just followed the path and ended up at a nice rock and wouldn't you know it, right next to the inlet. The three guys? Never saw them.

Packed up, hiked back up to the truck, and drove out to Ferguson Point to try there. Someplace different. Fished until Noon and then moved again. All I got on the two rods was crap off the bottom. My next stop was that rock I fished back on September 1st, but this time I didn't have to wade out to it. The lake had dropped some and I could walk to the rock. There were a couple of girls fishing on the rock to the right, but they said they hadn't caught anything. More about them later.

I set both rods out, one with PB and the other with a blown up nightcrawler. Didn't get any interest on either rod, so with past experience on my mind, I set up both with Power Bait. The school went by and I had one on and then the second rod hit. I reeled in the first one and put the fish (still on the hook) in a little indentation in the rock (filled with water) and reeled in the second one. As I was unhooking the one I just reeled in, it flipped up and back into the water for another day. Too bad, it would have gone a good 14 inches. The second one went on the stringer.
By this time the clouds were starting to gather. Remember, we've had thunder and lightning storms for the past 5 or 6 days. Then it started to rain. It looked like this. 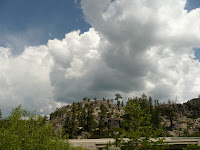 Two of the three girls from when I got there, came back and were fishing again, but still hadn't caught anything, so I went into teaching mode. They were waiting for me to leave, so I had them come over and rigged one of them up with my slip sinker rig and while I was rigging the other, the first girl caught a fish. We talked about pliers for taking out the hook, I gave them a jar of Rainbow Power Bait, having rags to wipe off your hands (I left a couple), and this blog, for future information.

I hope they caught more because that's what we're out there for. Things are definately looking up.