Not About Fishing, Mostly

We've lived here in Volcano for seven years this last July and gardening had been a nightmare. We have an area off to the right of the house that fenced (to keep the deer out) and has a sprinkler system installed. The first two years I tried the usual stuff. tomatoes, Zuchinni, Bell peppers, chives, and such. It was a disaster. The ground is bad, the sun doesn't shine there very long, and the only thing that has survived is the little bunch of onion chives. We even put in a box system to no avail and then tried containers with "garden soil". Still couldn't get anything to grow.

This year, as a last ditch effort, I put three pots on the porch and put three different types of tomatoes in each. Early Girl, Roma, and Beefsteak. 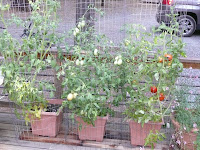 I'm astounded at the number of tomatoes on each plant. The plants themselves are just about six feet in height and this is the beginning of the mass of tomatoes turning red. I guess you just have to find the place they like the best. Too bad they can't tell you and you spend so much time testing. We also have a half barrel of Basil for Pesto. That will be next weekend.

So, fishing. Last Monday (Labor Day) I must have pulled a muscle in my neck. I wasn't able to turn my head to the left, even a little, until Friday and then only a little. Since Friday we've been having those afternoon thunder storms in the mountains and for some reason, in Amador and Calaveras Counties, earlier in the day. Now, I'm not a chicken (you know this because I've gone face to face with the bear, almost), but when it comes to lightning the last place I want to be is sitting on a rock, out in the lake. This thunderstorm thing is supposed to last through Tuesday, maybe Wednesday so I think I'll just hang out at the house and wait it out. We've had thunder already this morning. Oh, and the stiff neck, still there but getting better.

I'll be back to fishing shortly, so hang in there. As soon as I can, I'm headed back to Silver Lake to try the blown up crawler trick, but this time with live ones.

I'd do something on the 9/11 thing, but all you have to do is turn on the TV and you can see all you want. By the way, I did have a friend that was in one of the towers when it happened. He lived to tell the tale.