Monday I received an email from a gentleman that lives in one of the neighboring towns with thanks for the columns I write in the local paper. He also wanted to let me know that he and his daughter had one of their best fishing trips this summer at Silver Lake (pictures of the trout included in the email). He used a slip sinker rig with a pumped up (air) crawler.

If you've followed along for any time, you've noticed that I rarely fish Silver Lake. Why, you ask?. Last time I fished there, it was off a place called Ferguson Point picnic area and all was well until 10:00am when 9 cars arrived and a million people (maybe 30 or so) ran from the cars and jumped into the lake right where I was fishing. Put a bad taste in my fishing mouth.

But based on Brian's email, I thought I'd better give Silver Lake another try (just in case I was missing something). With errands to run on Tuesday, I picked up some cat food (stops them from gnawing on my legs), a few other things, and on the way back I stopped and picked up a box of night crawlers.

I did a little research on Silver Lake on the Fish Sniffer website and picked an area to try.

A shot of Silver Lake from my perch (to be explained later). 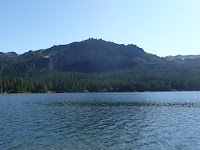 There isn't a road that goes all the way around, but if you don't mind walking, there are trails. I picked a spot that wasn't too far from the road, but not a distance I couldn't negotiate. Got down to the lake and found the water was very shallow out to an outcroping of rocks and then deeper from there out. I walked to the best looking rock and it wasn't too bad, the water was only a foot deep at the deepest part and parked on a rock similiar to the ones in the picture below. Actually I was right next to these. 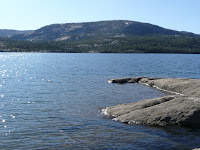 Now I'm ready. Take one rod and put on some Rainbow Power Bait on a slip sinker rig and cast it out. The other rod, I changed the #18 gold treble hook for a #6 bait hook and got ready to put on a nice big juicy crawler. I opened the top of the box and all I saw was mold and slimy, what was once crawlers. Note to self and others: Check them suckers when you buy them to make sure they are alive. I didn't because I've always gotten good crawlers from this place. Won't happen again.

So, I fished with one rod with Power Bait and Kastmasters on the other. Kastmasters didn't produce anything nor did Panther Martins, but the Power Bait did. I got there at 0830, had one on the stringer by 0900, the second one by 0930 (by this time I had both rods out with Power Bait) and between 0930 and 1130, I put three more on the stringer for a limit. I'd show you a picture, but you've all seen dead trout before.

A couple of guys came and parked on the rocks in the picture using pumped up crawlers and managed one while I was there. A couple of guys over on another set of rocks were using Power Bait too and landed one, but missed several hits.

Thank you Trout Gods. Now I have seven for the smoker and will be firing that sucker up this weekend. Saturday is out because we are meeting our wine tasting friends for a trip to the wineries and dinner, but there is always Sunday & Monday. I'm not sure what recipe we'll be using that's a decision for the cook, but I'll let you know how it turns out.

Oh yeh, remember that post from July 31st about the Maranello Restaurant? This is the email from our friends.

"We went to Maranello's Saturday night for dessert. We were quite surprised when Maria the manager came out to visit with us. She remembered the four of us dining with them. Especially, since Mark's blog made it all the way back to the Owner's daughter and Maria had printed out the blog and posted the review in the Kitchen. She wanted to let you know the blog made her and the pastry chef's day!! She even brought the copy from the kitchen out for us to see it!!! They are trying very hard to make Maranello's a fine dining establishment and getting those kinds of reviews make there jobs so much more enjoyable. They take their reviews very seriously. You really made their day!!!"

Not that the Shoreman doesn't already have a fat head, being a Leo and all.

That's it for this adventure.