Ever since last year I've wanted to put the Float Tube Cumberland in Lake Camanche from the north shore. I mentioned in the post last Monday that I might and today I did.

I left home at the usual 0730 and drove directly to the lake. No coffee, no nothing. Got to the lake at 0845 and aired up the FTC, gathered my fly rod (with intermediate sinking line), couple of boxes of flies, and all the other stuff that goes with float tubing.

Pushed off at 0900 and on the way out, snapped a photo of Shoreman's truck from about 300 feet out. I always taking pictures from shore, thought I'd give you a change of scenery. 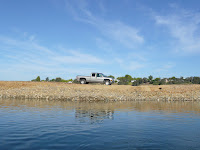 Had a specific path in mind and headed to the right from here. I got a new rod holder (you know, the kind that straps to the float tube) from Bass Pro Shop and set it up with a spinning rod and a #7 Rapala in Fire Tiger color, just to trail behind and see if anything showed interest. Just to be done with this rod, nothing did.

About half way to my turn around point, I got my first hit at about 0915. I'm guessing a pretty good sized fish, but in screwing around with trying to reel in the excess line and not paying attention to keeping a tight line (the bane of every fisherman's existance) it managed to send the fly back at me.

At the turn around point, I did a 360 turn and casted in all directions just to make sure I hadn't missed anything. As I started back the way I came, I saw a fish roll about 40 feet to my left. I was hoping for just that, because they did a lot of surface feeding on Monday when it was raining and I wanted to give sight fishing a shot.

The cast was just across where the fish had rolled and I didn't get to strip the fly more than about 2 feet and it hit. The fight was on and then the fight was gone. When I stipped in the line, the line had broke at the double surgeon knot, but on the tippet side. This was about 0930. I have to think the tippet might have been worn, old, frayed, who knows, but lesson learned. Tie on new tippet at the beginning of every trip. It was a big one too. Maybe 3 pounds.

Flippered back across and did another 360 and flippered back to the other turn around. A distance of maybe a quarter mile. Flippering back toward where I launched, one of the shore guys yelled at me that I was crossing his line. Like me on the surface was going to effect his rig on the bottom. Besides, I was 150 feet off shore and I doubt he could even cast out that far.

Just after our little sparing session, I hooked up again. This time I didn't have to worry about the slack in my stripping apron because the fish took all that line and then some. I worked it in and got it into the net as soon as I could. Pulled out the fly and with a quick photo, back into the water it went.

Not the most perfect picture, but you get the idea. 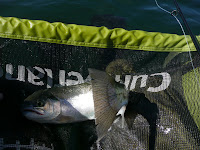 I estimate about 19 inches and around 2 pounds. Didn't want it to be out of the water any more than necessary since the water was still warm. It did swim away, back into the depths for another day. I wrapped up the day at Noon and headed out for some lunch.

So, what was the magic fly? What is my first choice when fishing a lake? A Tungsten Beadhead Thinmint of course. Today it was a size 10 and worked wonderfully.