Back on the post dated October 6th; I mentioned that I might get the chance to tour the hatchery at Lake Amador. Today I got that chance.

First I want to note that the test they ran the week of October 9th; was a success and they began stocking those beautiful Cutbows or Donaldson Trout that inhabit the lake. They’ve made a little change in how they stock compared to years past. Instead of stocking 5000 pounds each Wednesday at 10:00am, they are stocking 1000 pounds daily (I’d tell you where, but I’ve been sworn to secrecy), but at different times. The problem with the previous stocking program was that even though it was posted that no fishing was allowed until 5:00pm on stocking day, fishermen would run over there as soon as the stock truck was out of sight and start fishing. This way the hopes are that more fish will make remain in the lake and not be caught, right off the bat. As of today, they’ve planted 7000 pounds of fish ranging from 3 to 6 pounds. The biggest caught so far this year was last Sunday and it weighed in at 6.23 pounds.

I met with Lee Lockhart (head hatchery guy) at the check-in and we drove over to the hatchery. I would tell you where it is, but I’ve been sworn to secrecy on this too. I will tell you that it is not the place you pass as you drive up the dam to the lake. That is a Sturgeon farm for caviar.

I did more of a pictorial review of the hatchery rather than a lot of words. You know how the saying goes, “A picture is worth a 1000 words”. So, I’ll start out with the “little guys”. 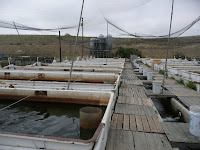 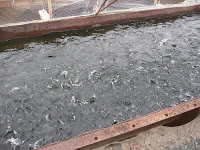 These are “fingerlings” about 6” long and this is their first stop on the long (about 2 years) trip to the lake. Notice the netting over the tanks. It keeps the Cormorants and Kingfishers out. It would be a bird smorgasbord. Even though the net is there, the birds still manage to sneak in once in a while.
When they get a little larger they are transferred to these bigger, round tanks for the next phase of growing. The ones in these tanks are about 2 pounds. 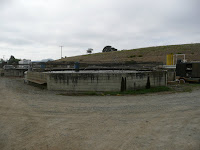 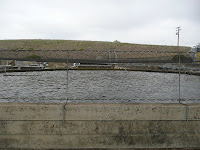 Here’s a little video of a tank full of 2 to 3 pound fish.

They are appreciative little guys. If you’ve seen that little “feed the fish” thing on the side of several blogs, you can imagine then, that when a human walks by the tank, the fish immediately swim to that side and get all excited. Kind of like Pavlov and the dog thing.
Then the last stop before the lake is this holding pond with fish from 3 pounds up. 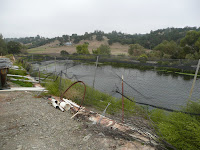 In the past, eggs were purchased and the trout were raised in the hatchery, but recently they have been keeping brood stock and raising the trout from the eggs harvested from brood females and fertilized with males kept in an adjoining pond.
Here is the tank with the females, many are ready to spawn. 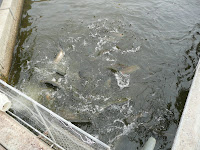 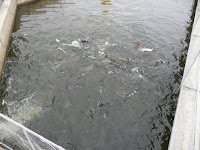 In the tank next to it, are the males. 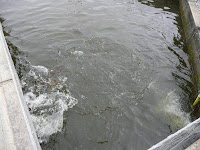 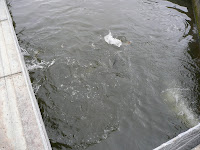 Let me tell you, these are some BIG trout. Most are 5 pounds and above, and I mean way above. There was no taking my fishing rod out of the truck while I was there either.
I’ve been to the hatchery at Natomas where they grow Steelhead and Salmon to put into the American River, but this was where the fish I caught, the beginning of last year, were raised. To recap what I caught, it went something like this: 4lb – 8oz, 3lb – 15oz, 2lb – 15oz, 4lb – 12oz, 5lb – 2oz, and my personal best, 7 pounds. Some of the ones I saw today would top 7 pounds, easily.
I’ve heard several guys complain about the $17/$18 to fish here, but I can tell you it’s a lot cheaper than the hundreds to thousands that some pay to fish at those fancy lodges and catch fish that are a lot smaller.

Then let’s talk about Mark (post dated January 25, 2011) who is 9 years old and caught his first fish at Lake Amador. I estimated it to be around 4+ pounds. Well, his Dad sent me an email and it turned out to be 5lbs and 21” long. I’m sure that set him to be a fisherman for life.
So if you’re in the area, why don’t you run out there and cast a lure or two. Want some hints? Try Kastmaster in gold, Brook Trout, or Fire Tiger colors. Try a Rapala F7 or F9 in Fire Tiger or maybe just a plain white Crappie jig. There’s a lunker lurking in the depths with your name on it. Better go get it.
Till next time.