Planned to go up to Bear River with Roy, but he bailed, so I went alone. Since I was going by myself, I waffled about staying home, no I'm going, no I'm staying home, OK I went.

Out the door at 0730 and stopped at Cooks for coffee. Got to Bear River Reservoir at 0815 and drove down to a level spot by the lake. The place I usually fish is on a slope and I wanted to try out my new Coleman fishing (most people call it a camping chair, but this one is specifically for my truck and fishing.) chair. To do that I needed a kind of flat place.

Here's the new chair. I'd tell you what model, but I think it was made especially for Walmart (where I bought it), but I couldn't find it on their website. 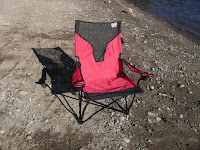 So, let's define the title of this post. This is the Lazy part. Sit in a comfortable fishing chair with bottle holders in each arm. Works good for a water bottle, but too small for my coffee mug. I'll keep it anyway.

Now for the Hazy part. They have these things (best as I can describe them) called prescribed burns. The California Department of Forestry (referred in the future as CDF) picks an area and burns all the undergrowth and pine needles. This helps with controlling a future wildfire as long as this burn doesn't get out of control. Oh yeh, they have in the past and probably will in the future. By doing this controlled burn, it causes a bunch of smoke in the area, hence the hazy part. 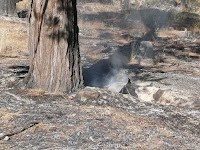 Now for the crazy part. After I got the chair planted and my butt in the chair, I put out two rods with Rainbow Power Bait on a slip sinker rig and, of course, sweet corn Pro-Cure gel. There was no plan to catch anything, I was soaking up the sun, vitamin D, and generally relaxing. Then there is the best laid plans of mice and men. The first twenty minutes of sitting there soaking and relaxing produced two 10" Rainbows for the stringer and one that broke the leader (I think the leader was frayed a bit). A bit crazy, three fish in 20 minutes. The other 3 for the stringer came between 0835 and 1015. A limit and I'm on my way home. So much for lazy.

The Fall part, around 30 degrees when I got there. Line out and hoodie on with my hands in the pockets. By the time I left, it was 50 something and t-shirt weather. That's Fall at 5850 feet.

Roy and I will hit Bear again early next week. Hopefully it'll be just as good.