Sitting here typing this post, I'm listening to Boomer Radio. If any of you Geezers out there don't know about it, here is the link: http://www.boomerradio.com/. All oldies and the great thing, it's FREE.

We are expecting rain, starting this evening, so I thought I'd take a shot at Red Lake before the snow, yes snow, gets here. I'm hoping that the approach of this storm would trigger the Brook Trout spawn at Red.

Rolled out of the house at 0730 (as usual) and stopped for the standard cup of coffee at Cooks Station. Blew by Bear River Reservoir and stopped at the Peddler Hill Overlook for a panorama shot of the lake for your enjoyment. 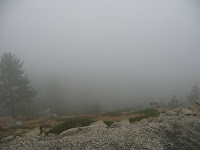 Sorry, it was a little foggy up there.

Now, remember the blasting area at Carson Pass was to be completed by September 30th which would make it a good day to take that shot at Red Lake without waiting the nominal two hours. I even stopped at the rest area, to go to the bathroom, so I could jet right over Carson pass and drop down to Red Lake. They weren't done........ Got stuck in line (at the stop light) from 0835 until 0900. From what I could see, it'll be next September when they are done. Good luck when it starts snowing.

OK, got to Red Lake and since the wind was blowing 15 to 25mph with gusts to 45mph, I opted for one rod with 1/4 oz Kastmasters. I walked from the left side of the dam about 1/2 mile along the shore. I worked the Kastmasters like this. In about a 150 foot span, I fished a silver one, then a gold one over the same area and finished up with a silver blade Panther Martin (the one with a yellow body and red dots). All three have been good at this lake. Then I'd move 300 feet to the right (back toward the dam) and do the same routine.

At my first stop I noticed a little Fall color so I took a shot for you. 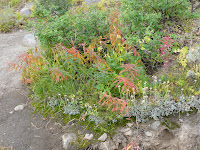 I worked all the way back and across half of the dam and I didn't see anything that looked like a
Brook Trout. All I got for my efforts was two of those little (6"-7") Cutts I've been getting there all Summer. Probably the same two I caught before. While I was standing on the dam, I took a picture back toward Carson Pass of some of the clouds from the incoming storm. 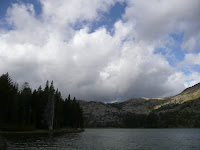 At 1015 I packed up and headed back over the pass. Coming over the delay was 35 minutes. Going back the delay was 50 minutes. Finally got through and on the way by, I noticed that Caples and Silver Lakes both had whitecaps on them, so I passed and headed for Bear River in the hopes I could tuck into the side of the dam and maybe fish without the hurricane winds. Wait, hurricane winds are from 75mph up. Ok, so Tropical Storm winds.

Got to Bear at 1130 and parked at my usual spot with two rods out with Power Bait. I fished from 1145 to 1245 and put 5 on the stringer for Bob and lost one to that old "flipped off the hook and back into the water trick". Just as I was leaving the helicopter below was landing in the parking lot on top of the dam. I think it's used for maintenance/inspection of the lake. I've seen it on several occasions, but not that close. Wonder if one could trawl with it? 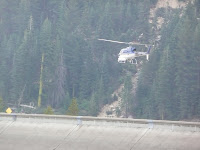 Well, that's it for today. Oh yeh, the storm is due to start tonight, but the snow is due on Wednesday (depends on what TV station you listen to) down as far as 6000 feet. That would cover Red Lake, Caples Lake, and Silver Lake. Going to be white up the hill. Later this week I'm going to take a run out to the lower lakes to see what the outlook is. I'll let you know.