The storm hit last night and is was a pretty good soaking. I would guess upwards of two inches of rain.


Yesterday I had errands to run down in Sacramento, so I picked today for my trip to the down country lakes for a seasonal update. Besides, yesterday it rained all day and today was supposed to be intermittent showers and I had a few errands to run in town.

My first stop (in the pouring rain) was Lake Camanche. They have not started stocking trout this year, but will be starting in a week or two. They are having their 2nd annual Derby Day coming up on October 15th and want to have some fish in the lake. They will be stocking the Trout Pond at the south shore entrance at the same time. People are already filling the camp grounds in anticipation of the first stocking. As for the Trout Pond, if you’ll remember last year, the pelicans were in mass and as they dumped the fish out of the stock truck, the pelicans were scooping them up as fast as they hit the water. So far this year the report is that there are no pelicans to be seen at the pond. One can be hopeful.

Good luck to everyone participating. As for me, I won't be there. The best bet for a derby like this is from a boat and as you know, I'm Shoreman.

Stop number two was at Lake Pardee (it was still pouring, maybe intermittent pouring?). As of September 30th they have stocked 77,000 pounds of Rainbow Trout. They will be closing on November 6th, but will reopen around February 17th or so. This year I'll be there on opening day.

The last stop of the day was Lake Amador (yes, it was still pouring). You know, where we got those big Cutbows this past January & February. So far, in 2011, they stocked 113,300 pounds of Trout. Starting next week they plan on doing a test stocking of about a dozen small trout just to see how they will fair. If they do well, the stocking will resume shortly thereafter. There is a chance that yours truly might get a guided tour of the hatchery. If that comes about, I will surely share my experience with all of you.

If you don't remember this picture from last January 7th, this is the spillway at Lake Amador where we did most of our fishing. Notice the buoys. Today it was dry (Ok, it was raining) all the way to the right of the buoys at least 30 feet. Sorry I didn't get a picture, I left the camera at home, but you get the idea. 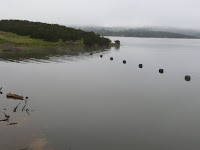 That’s it for today’s adventure. As the upcountry lakes start winding down, the down country lakes are starting to ramp up. As for the weather, our intermittent showers are still pouring and upcountry, the snow level (per the Noon news, you didn’t think I was going up there too, did you?) is just below 5000 ft (we are at 3215 ft). The next seven days or so are supposed to be warmer, so I don’t have any expectations of the snow staying for very long, at least at the lower levels.