I've been dealing with a tooth problem for the last couple of weeks. I originally thought it was a sinus problem radiating into my teeth, so I went to my doctor to have him prescribe an antibiotic to see if the problem could be corrected. It hasn't and I'm off to the dentist tomorrow morning to have him fix me.

So what does this have to do with fishing? Plan A was to take the Float Tube Cumberland out to Camanche and test a couple of larger Tunsten Beadhead Thinmints in size 6 that I put together. Only problem is that the more I walk around, the more the mouth hurts. Flippering around the lake would have probably sent me screaming back to the truck. This put plan A on hold.

Plan B was to put out my fishing chair (you know, that cool red one), two rods with Rainbow Power Bait, and quietly catch fish. Don't move, don't hurt. Works for me. The first two came at 30 minutes into the day. The picture below is the first one and the second one looked just like it. Something close to 1-1/2 to 2 pounds. Both went back for another day, same as would have happened from the Float Tube Cumberland. The water is colder than it's been, but still in the high 60's and I think, too warm to keep the fish. 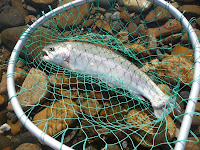 From there on, it was sit quietly because the fish were not disrupting me in any way, shape, or form. Decent of them, don't you think. Those two were it for today, but I did see 10 or 12 more caught by other people fishing.

I also checked on the Trout Pond (you remember that place from last year) and they haven't even started stocking it because the water is too warm, BUT they are making an attempt to deflect the Pelicans and Cormorants and allow the fish to make it into the pond. We'll see.

Weather Channel says we're supposed to get some rain on Friday so maybe I'll take a run up the hill on Thursday. We got our first snow last Saturday night. Just dusted, but a bit early in the year for snow. I would suspect that with the cold nights we've been having, the lakes are going to start icing up pretty quick. Probably should get one more fishing day in, upcountry, before it's too late.