I Just Should Have Gone To Bear

The blasting at Carson pass was supposed to be completed by Monday 10/31/11. Happy belated Holloween.

Plan A: Left the house at 0730 and stopped for coffee at Cook's Station. All this time I've been talking about them and I've never shown you a picture. What a bonehead. Here you go. 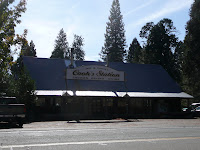 With coffee in the cup holder, jetted up Highway 88 to Red Lake to see if there were any Brookies showing up. It should have dawned on me when I passed several trucks coming down the hill full of big rocks, but I'm an optimist.

Got to the pass and there were 25 or 30 cars & trucks waiting to go through. One truck even had it's hood open and the driver was working on his engine. Not a good sign. I drove into the rest area, did an about face, and headed back down the hill.

Plan B: Stop at Caples and fish the dead tree. The fact that I didn't see anyone fishing Caples on the way up should have told me something too. Ok, I'm a little dense, but I'm an optimist.

It must have been a mighty chilly last night. You can't see very well in the picture, but the rocks are covered with ice. 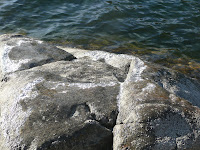 In the picture below, if you look at the little rock sticking out, you can see the icicles hanging off it. 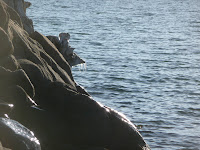 Not to be deterred, I put out two rods with Rainbow Power Bait and sat in the sun. That's all I did was sit in the sun because there wasn't a fish to be found. Caples has not been very good this year. I'm not sure why, but there isn't even any chatter on the local forums about any of the upcountry lakes.

Plan C: Bear River Reservoir. Chances were good that I'd at least find a fish there. Last couple of trips have been pretty good. I got there at about 1100 and set my new fishing chair out, one rod with Rainbow Power Bait and a dab of Pro-Cure Sweet Corn. Before I could get the second rod rigged, I had a fish on the first one. Lip hooked and back for another day. Got that rod out and the other one and hooked up on both. Oh, this was LOOKING GOOD. Both were lip hooked and back for another day. Rods back out and another one, but this time it was a good 12 incher. I kept that one. This happened in the first 10 minutes I was there. Then it got quiet. Half hour later, I put one more on the stringer, but this one a bit smaller, maybe 10 inches.

I'm not fishing where I usually fish (100 feet or so from the dam), I was a good 500 feet or more from the dam. There was a guy fishing in my usual spot already, but I wanted to fish near where I fished on October 28th anyway. When I was there on the 28th, I mentioned a guy fished in this spot, but didn't catch anything. I wanted to see if I could do any better. Here's a shot from where I fished. Along the shore and over the big rocks is were I usually fish. 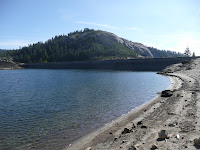 After the first 5 (2 on the stringer and 3 released) it got quiet. Really quiet. In fact I didn't get another bite until about 1230. It was a smaller one (maybe 9 inches) too, but I put it on the stringer anyway. Ate a couple of granola bars, drank a little water and soaked up some sunshine.

Sitting, waiting, sitting, waiting. twiddling my thumbs, picking my, nevermind I don't want to go there. So I reeled in one rod and put on new Power Bait, cast it at a 45 degree angle toward the dam and hoped for the best. It kind of went like this: cast, splash, bite, fish. Cast, splash, bite, and second fish. Five on the stringer and time to go home.

The one thing I stressed on the October 28th post was the Pro-Cure flavor of the day. Today there wasn't a favorite. They hit on Anise, Sweet Corn, and Threadfin Shad, but they wouldn't hit plain old Power Bait by itself.

I just went over on the Pro-Cure site and there are 53 different scents. A couple of cool names like Butt Juice, Carp Spit, and Salmon Slammer. You know how I am with cool names.

All right, 8 for the day with 3 back for another day and five for Bob (I plow for fish). We are expecting rain to start tomorrow and the possibility of snow (down to 3000 feet they say) at our house by Friday morning. Let's hope not.

Probably won't get out again this week, so until next week.