Pink, The Color Of The Day 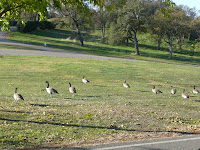 Growing up in Winconsin, my father was a hunter like most of the neighborhood fathers in the 50's. On Easter we had ham, on Thanksgiving we had turkey, and on Christmas we had Goose. I think the Goose looked like these.

The morning sun over Lake Camanche. T-shirt weather by 10:00am. 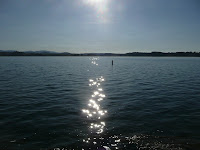 What can I say, target practice. Got within a foot on several casts. Need more practice. They were getting much too close to where I was fishing. 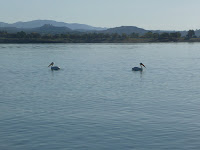 OK, back to the title. Pink, and it's not even October (Breast Cancer Awareness Month).

Got out to Lake Camanche at 0830 (after coffee at Starbucks) and found the spot I was looking for. If you look at the sun picture, you can see a buoy in the distance. It's out 150 feet or so from shore. I put out one rod with Rainbow Power Bait and Sweet Corn bait scent. On my Okuma with 2 pound test, I put on a silver Kastmaster.

I covered about 180 degrees from where I was sitting (lazy bum that I am) with 8 casts. With no interest, I changed to gold. Same process. Then changed to silver/blue, Brook Trout color, Fire Tiger color, and last, but not least, orange. When I didn't get any interest in those colors, I walked back to the truck and out of my "backup stock" tacklebox I got a Rainbow Pink one.

All these Kastmasters I'm throwning are 1/4 oz on 2# test Fluorocarbon. Good thing it's strong. The one thing I do when I have two rods out, is that while I'm reeling in the one with a lure, I watch the one with Power Bait in case I get a hit. When you're doing that, a hit on the lure is a surprise. OK, any hit on a lure is a surprise.

Then the fun began. On the 4th cast, that would have been straight out from where I was sitting (lazy bum that I am. Wait, I already said that.), the line stopped dead in the water and the fight was on. Wasn't much of a fight and if you double click on the picture below, you'll see that there are "things" on this fish. I don't know if it's a fungus or maybe Cope Pods or what, but it didn't put up much of a fight. Kind of lethargic. Since it was kind of "skaggy" looking, I put it back to live it's life out in the lake, probably not very long. Time: 0930 and the weight was somewhere in the area of 2 1/2 to 3 pounds. 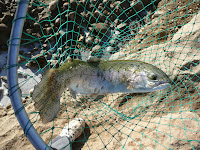 Then around 1030, I hooked up again. This one was no slouch. We rocked and rolled for about 5 minutes until I got it close enough to put the net on it. Well, put the net on part of it, as it was too big to fit into the net. Note to self, get a bigger net. The best I could do was scoop it from the back and pitch it up on the bank. The hook was badly embedded in it, and by the time I got it out, the fish was bleeding too bad to put it back.

I stuck it on the stringer, took a weight reading with my Handy Dandy Berkley Digital Scale and it came in at 4 lbs, 15oz. You can see by the picture of the lure how bad it mangled the hook. Notice the tail is worn down. Hatchery trout. 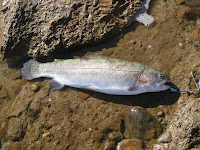 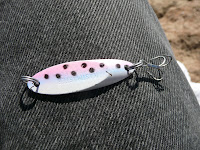 After that, I got a drive by at 11:00 and another one at 11:10. That was it for the day. Since I only had the one, I stopped by some fishermen down the shore a bit and asked them if they wanted the fish to add to their stringer. Since they only had one, they said "sure". Two big trout make a nice dinner.

That's it for now. I might take a run out to Amador on Friday and give the wife some peace and quiet and a little time for herself. I'll let you know if I do.