As I mentioned in the last post, I wanted to head up the hill and see the lakes looked like. Well, I hit snow at about 4000 feet, before I ever got to Highway 88. I'm not sure if this was a good or bad omen.

First stop was Bear River Reservoir (after stopping for coffee, of course). The gate is still open (don't know for how long, because there is snow on the road), so I drove over to the dam. My goal was Red Lake (Brook Trout for the smoker) so I just took a quick shot of the shoreline and headed back out. I could always stop on the way back if nothing happened further uphill. 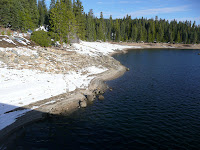 Silver Lake was much easier as I could scope it on the way by. The lake level is way down as it usually is at the end of Summer, but no ice that I could see on the lake.

Caples lake was the same way. Water was clear and the lake level was down some but not very far. There was a lot of snow on both sides of the lake.

The blasting at Carson pass is still going on and the wait going over was only 20 minutes, so I waited. Once over and down the hill to Red Lake the snow was a little deeper. Parked as high up the road as I could (don't want to be climbing in snow covered slopes any more than necessary) and grabbed my gear. 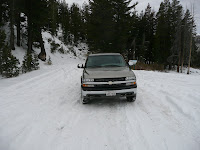 Set up (carefully) at my usual spot. Noticed small areas of ice on the lake. Won't be long before it's iced over. By now, the Brook Trout HAD to be in a spawning mode and SHOULD be biting. One rod out with Power Bait and the other for lures. I tried every color of Kastmaster, gold and silver Panther Martin, bumblebee color Roostertail, and red/bronze Little Cleo. I never got a hit, follow, bump, yes, I, or Boo from a fish. Two hours of sitting on my but, in the snow (On a chair pad. You don't think I'm that dumb do you?) and NOTHING.

Now, did I mention the tooth ache I had on Tuesday? Well, it went from dentist to endondontist to root canal yesterday. Now the endondontist said I would probably experience a little after pain from the shots, drilling, and the infection for a couple of days, but a little pain never slowed me down. Little being the definitive word here. I had taken Tylenol (or a reasonal facsimile) at 0500 and 0900, but by Noon I thought my face was going to fall off the pain was so intense.

Packed up, drove down the hill (the wait at Carson Pass was 25 minutes this way) straight home for drugs more powerful than Tylenol. Finally got the pain under control around 4:00pm. I'm staying home for a couple of days.

I don't know why the Brookies are not biting at Red Lake, other than the DFG has not planted this year, but I do know that there won't be any smoked Brook Trout.
The next trip will probably be to Lake Amador. Got an email from my friends Rich & Mark and they are ready for a trip out there. Don't wait for me guys, might be a couple of days.