My wife had to be at work at 0445 (get up at 0215) this morning, so being the loving husband I am, I got up with her, got her off to work, and being that good loving husband, went back to bed.

I rolled out of the sack at 0730, jumped into the shower, made a ham sandwich (on Miltons Multi-Grain Bread [very healthy]), wolfed down a bowl of cereal, threw the sandwich, two chocloate chip granola bars and a half dozen Lendor Truffles (both unhealthy) into the cooler and headed out to Lake Camanche. The Float Tube Cumberland and all the related accessories was already loaded.

Got to the lake at 0915, after a quick stop at Starbucks for coffee and launched. In the picture below, I headed for the point at the right (water temperature 49 degrees), then across the lake to the p oint on the left, then back in to the launch area. I fished the Thinmint, black Wooly Bugger, a purple Wooly Bugger type fly with striped legs that came from Dave Swart up in Oregon, an Olive Wooly Bugger, and then finished up with the Thinmint again. Absolutely no interest in any flies. 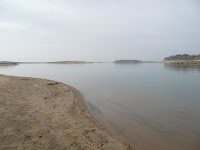 I've fished this area quite a few times in the past year and I thought, for sure, that the area I tubed would produce fish. I've never seen a boat in this area, I've caught fish here on a regular basis, and just to rest my mind, once I got in (1100) and loaded the tube and related accessories into the truck, I got out my two rods for Power Bait, my chair, net, stringer, and lunch.

Fifteen minutes later, I had the first fish to hand. It looked like someone had grabbed it and then put it back because it had, what I would call a bacteria spot, right behind the head so I just cut it loose. At 12:20 I landed the second Rainbow. Put it on the stringer after looking to see if it had any bugs in it's mouth. It was clean. Then at 1:20pm I had another hit, but missed setting the hook. From then until I left at 2:00pm, it was social time. Lines were out and the fish were gone. At least for me. There were a couple caught by the folks near by.

I'm ending the year on a high note. It was a good year, but not a great year. When I started keeping track of the number of fish I caught each year it breaks out like this.

I know a lot of you don't fish by the numbers and I don't either, but I do use the "Fish to cost of license ratio" as a journal of sorts and in doing so, it keeps a total fish count. It tells me how I did at a certain place, at a certain time. I know I couldn't keep those kind of statistics in my head. Hell, I can't remember my name most of the time.

The last thing this year is the results of my New Years Resolutions.

1. Change my tactics for catching Steelhead and catch one. Nope, didn’t catch a one. Another Steelhead card goes back to the DFG with all zero’s on it.

2. Go back and fish Heenan Lake. Nope, didn’t complete that one either.

3. Beat my personal best trout which was 4lbs 13oz. Yes, tied that one with a 4lb 13oz Cutbow, then beat it with a 5lb 2oz Cutbow and then beat it again with a 7lb Cutbow all from Lake Amador.

4. Attend the Fly Fishing Show in Pleasanton. Got snowed out. We had a very cold storm scheduled for that weekend in February, so my son and I decided to forgo the show in lieu of staying home shoveling snow. What a couple of great guys.

Since I only made 1 out of 5, I think I'll pass on New Years Resolutions this year.

So, Happy New Year to all my friends out in the blogosphere. I'll be back next week with a trip to Sacramento in pursuit of those damn Steelhead. New year, new tactics.

I'll see you next year.