I've been using, on occasion, my

wifes laptop to do this and that. Recently, I got yelled at for uploading a few applications I needed for something or another. Things like Google Chrome.

Well, Santa decided I needed my own laptop so I'd leave her's alone. Well, here it is.

It's a Dell XPS with Windows 7, Internet Explorer 9, and a bunch of other stuff, but I have no idea what it is yet. 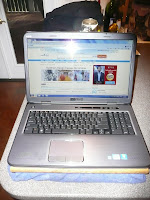 Now I'll be able to blog from anywhere there is WIFI, although I've already been told that I'm not to take the laptop out on the Float Tube Cumberland. Darn, I had such high hopes.

Just a short update. As Martha Stewart would say "I'm so excited". You had to be there to get the full effect.

Hanging out for the weekend and will be back on the water next week.