Thanks for your comments on the trashing of our Aspens. We lost 2 of the three, but I think I saved the third one by putting a fence around it. They've been in the ground for 7 years and were only 12 feet high. Hurts a bit to have them trashed after all the work getting them that big, but I take all the blame because I was the one that removed the fences earlier this year. Thanks to Daniel for the link to that article. Pretty informative. Blake, I have a gun. A really BIG one.

Fishing Tuesday. Left the house at the usual 0730, stopped at Starbucks for coffee and got to the North Shore of Lake Camanche at 0845. Set up at my usual spot (since I was the only one there) with one slip sinker rig and my Okuma with Kastmasters. Did a fan cast with Brook Trout, silver/blue, and Rainbow Pink. Didn't get any interest so I put out a second rig with Power Bait.

I came prepared to go the distance. I brought an ice chest with two ham & cheese sandwiches. Two chocolate granola bars, and two bottles of water. And don't forget I had a full commuter cup of coffee. I put out my red camping chair, had my cup of coffee, and a book to read. Lake fishing at it's finest.

Good thing I had all that, because I sat and read from 0900 to 1100 with nary a bite. I figured that since I'm already skunked, what would it hurt to try some place else. A year ago this past summer, my friend Yuki and I fished on the other side of the pennsula and down a ways. We had some luck at a particular spot, so I pitched my rod holders in the sand, set out my chair, and put one rod out with Power Bait and a little spot of sweet corn Pro-Cure scent. I didn't have any expectations because the water in that area is generally shallow by lake standards.

I figured that since I was on the point of the pennsula, I might as well take my Okuma and walk around the point casting a Rainbow Pink Kastmaster just to see what happens. On the fourth or fifth cast, my new Rainbow Pink Kastmaster went out about 200 yards. Great distance, but it would have been even better had the lure still been attached to my line. Oh well, hazard of the game. Walked back to my tackle box, put another one on, and continued around the point.

When I got even with where I parked my truck, I walked back across the point and noticed my rod (with the Power Bait) was bouncing (really bouncing hard) around in the rod holder. The fish was so tired by the time I got to the rod, all I did was reel him in. You know he must have been on the line for a while because a 1 lb 11 oz fish would normally give you a pretty good fight.

Things were definately looking up. So being the die hard lure fisherman I am, I put a second rod out with Rainbow Power Bait, but this time I added a spot of Anise to it and put the Okuma in the truck. Once I stuck the first rod back out with PB & a little sweet corn I settled into my chair for the wait. didn't wait long. In a matter of minutes, the rod with sweet corn was bouncing again. Second fish on the stringer. Then I put out both rods with PB & sweet corn. Then a third one and a fourth one on the stringer. Then nothing. The first four came in 45 minutes. Did I mention it was getting a little windy and a bit chilly.

With both rods out and the wind making my chest cold, I walked up to the truck (about 10 feet) and got my parka out (be prepared in winter, for anything). I put it on and walked back (another 10 feet) to my chair and one rod was bouncing again. Guess if I would have waited a couple more mintues, I wouldn't have had to make that long trek (all 20 feet of it) to the truck because that made 5 on the stringer and that's all you get. I'm trying to keep Bob supplied with fish, because it just might snow one of these days, maybe. 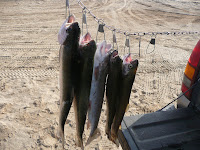 That's it for Tuesday. Don't know if I'll get out again before Christmas, but if I do, I'll let you know how it goes.