Yesterday I had to take a run into town (Jackson) to pick up some prescriptions, so I thought I'd drive out to Middle Bar Bridge and if anyone was fishing, see if anyone was catching.

When I got there, I saw that the bridge was empty and nobody was fishing. I probably should have realized that before I got there, when I saw a 6 point buck run across the river.

The picture on the left is what the river (or arm of Lake Pardee how ever you want to look at it) looked like back in May and the right is from yesterday. 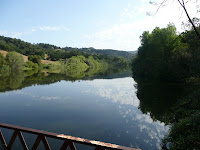 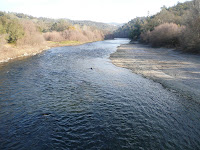 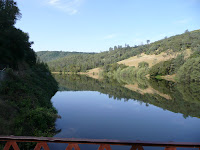 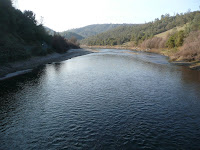 I figure no one was fishing because the water was somewhere around two feet deep. I would find it hard to fish from a 15 foot bridge into two feet of water. My friend Yuki says they do still fish, but were probably weenies and didn't want to be out in the cold. I would be concerned that, with the water level so low, the river regulations (as opposed to lake regulations) would be in effect (closed since November 15th) and the fine is too great to take a chance. So I went home.

Today I drove out to Lake Camanche. Against my better judgment, I opted for the Trout Pond rather than North Shore where I've been fishing. Quite a few people out there and the pond was stocked last Thursday. 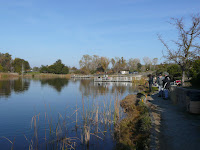 I arrived at 0845 and set up one rod with Rainbow Power Bait and Sweet Corn Pro-Cure Bait Scent. The other rod was set up with a floating bobber rig from Lake Amador back on the 28th of November. I had my Okuma with 2# test set up with that good old pink Kastmaster, so I started setting up my other rod with a slip sinker rig too. Before I could tie on the hook, I had a fish on. It was a one pound Rainbow and since I haven't gotten Bob any fish lately, it went on the stringer. This was at 0900. I was still trying to tie on the hook and landed the second Rainbow that went 2 lbs 2 oz on the Handy Dandy Berkeley Digital Scale. Time 0910. This had the outlook of a good day.

I almost forgave the management at Lake Camanche until the stock truck pulled up at 1030. As it backed up to drop the fish, the beeping from backing up (you've all heard the noise) was like a beacon to the pelicans. He barely got the fish into the water before the pelicans started slurping them up. One pelican grabbed a fish so large, the bird was half underwater trying to get it down it's gullet. You could mark the school by where the pelicans were swimming and eating. Maybe a dozen (could have been more, I don't know) managed to get away, but you can be sure the pelicans chased them half way across the pond.

The rest of the day (I left at 1:00pm) was sit, sit, sit with the exception of one quick hookup and spit out using that pink Kastmaster and a couple of drive by's. Nothing else on Power Bait. 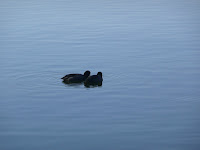 Next post (Tomorrow or Thursday) will be one of those surprise posts. Stay tuned.