Another day on the American River for Steelhead. Last Thursday I got the impression that I was doing something wrong. No duh!

Today was a different approach. With my 6wt, waders, and vest I returned to the spot I was fishing last Thursday. This time no spoons, only eggs and a little split shot for weight. I started tossing the egg across and letting it dead drift to the end of the line, which was about 45 feet. I have a marker at 35 feet and was about 10 feet past that. I'd do 3 or 4 swings and then move downstream 5 feet or so and swing again.

I got to a point where I was swinging out of the current and into the slow area below the rocks in the picture below. After a couple of swings, I got one of those line slapping hits that almost jerk the rod out of your hand, and then it was gone.


Adrenalin flowing, I continued to move downstream toward the guys you can see in the distance. Fished all the riffles, slow areas, and worked my way out to the main river, but to no avail. That was it for today.

On the way back upstream (I took another shot at that hole) I saw the guy below fighting something big a ways upstream from me. The reason I mentioned this is because I leapfrogged him and a guy he was fishing with (with their permission of course) all the way to the open river.

When I got to where he was fighting this fish, I was on a hill looking down to where he was. He fought the fish for 15 or 20 minutes while I watched and then ping, the line broke. I'm sure he saw the fish, but from where I was I couldn't see it, but what I did see was his line wasn't moving very much. It was like he hooked a tank and was trying to move it. The fish was definately in control.

So went the day, but I am much inspired but the line snapping hit this morning. I've got to do this again, real soon.


Pulled out of the house at 7:30 and headed down the hill to the American River in search of Steelhead. Seems all I do is search for them. Does it ever seem that when your ship comes in, you're going to be at the airport?

Plan A: Use my 6'6" rod with 6lb test to try a new lure I constructed. I got the idea from a fishing magazine I read the other day and placed an order with Cabela's for parts. Got to the river and the guy in the picture below was fishing a little side split of the river. Catch any today? I asked. He held up 4 fingers.

He tried to tell me they were in that little spot right in front of me, but the noise of the river was so loud (and I'm a bit hard of hearing anyway) I couldn't clearly understand what he was saying. I got the idea, though. Don't know if he told me what he was using and I didn't hear him or he didn't tell me. My guess would be the later.


Execute Plan A by tying the lure above, onto my rod and have at it. Cast, swing, retrieve. Again, again, and again. Obviously I didn't catch anything.

Plan B: Back to the truck and grab my little Okuma (2# test) and an assortment of stuff. I thought about bringing my fly rod, flies, and waders, but I didn't think I'd need them, thus the title. There was a gazillion guys fishing fly rods up and down the river. A lot of them catching fish.

OK, back to Plan B. First a #6 bait hook and salmon eggs with a small split shot to get it to the bottom. Snag, break the line, and re-hook, but this time without the split shot. Cast, drift, retrieve. Again, again, and again. Obviously I still didn't catch anything.

Plan C: 1/4 oz Little Cleo with 2 of the 3 treble hooks clipped off. Only one I had in nickle color (same as the 2/5th oz). Cast, drift, retrieve, Again, again, again until it snagged on the bottom and broke the line.

Plan D: Tie on a pink (seems to be a color the steelhead like) crappie jig and fire away. I'm not even going to comment.

Back to Plan A, but this time out in the big part of the river. Cast, never mind, you know the routine. Talked with a guy from down the freeway a ways and he was fishing an egg pattern on a spinning rod. Hey, I could do that except I left all my fly fishing stuff home. Ran into him some time later and he had caught one. OK, I'll bend over and you can kick away.

By Noon my back was trashed from walking and standing on the rocks and since I left my fly fishing gear at home (need I remind you of the title) I headed to Mick D's for a burger and fries. Gassed up the Silver Bullet (I don't think I ever mentioned the name of my truck) and headed home.

Next time (Maybe next week) I'll take my fly fishing gear. Got some good egg patterns to try.

I prefer to have my rods close to the ground because of the wind factor that shows up so often at the lakes. Blows the line all over the place. Thought number one is something like a tripod that can cradle the rod. Enter the Gorilla Pod.


Good idea with a little metal half loop screwed to the top. Only problem is that it was too low. I can still use it to hold the camera.
The picture below is the clay that is on the shore at Lake Camanche. Lake Amador is shale and impossible to stick anything in. I've tried to pound a 12 inch nail into the clay with a hammer and all I could get was about 2 inches of it in the ground. That stuff is hard. 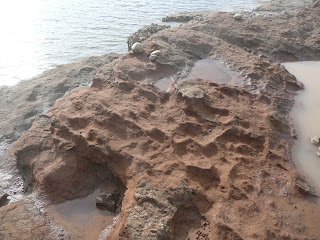 After thinking about it for a while, I came up with something made out of PVC pipe. Today I ran out to Camanche to give it a try. Sunshine up the hill when I left. A little different at the lake. 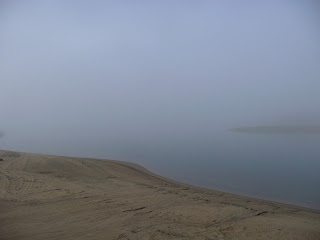 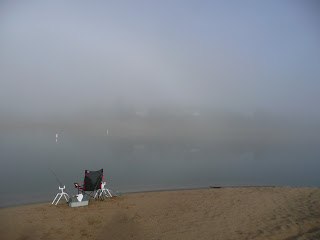 You can see the set up with chair, rod holders, and rods. Below is a closer look at the rod holder. It's made out of 3/4 PVC with caps on all the ends to prevent collection of unwanted sand. 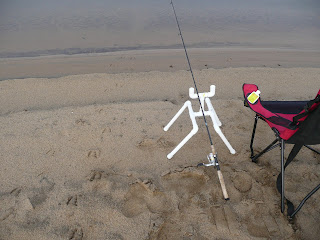 It keeps the reel off the ground and available to wind in a little line as needed to keep it fairly tight. Now, the only thing left is to try it when a fish bites, because none bit today. I know it's not perfectly symetrical, but hey, it does the job. Besides, I slapped it together in 15 minutes with parts I had in the shop. If you wanted one that held two rods all you would have to do is make the top U wider. I chose two, one on each side of the chair. Now that I know they work, all I have to do is put a little paint on it, to jazz it up some.