After stopping for coffee at Cook's station, I headed up the hill in search of open water. First stop, Silver Lake. That's all ice out there and since Silver Lake was iced over, made no sense to drive any further up the hill toward Caples or Red Lake. 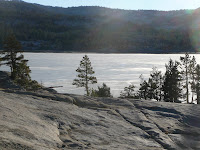 After turning around, I headed back to Bear River Reservoir. When I was in Cook's Station, I talked to a guy I've talked to before and run into fishing at Bear and he said that violation of the closed road to the lake was a $500 fine. Last time I was up there, I just drove around the gate. This time I stopped and took a look at the sign. It mentions California Streets and Highway
code 942.5 & 942.6 which by themselves don't mention any fine, BUT if they write you a ticket and the judge's gavel goes BANG, you get to give them $500. So I decided to do the Cardio Walk down to the lake.

Once I got to the lake, I took a little shot across the lake to show how low the water level is. You can see a lot of shoreline across there. 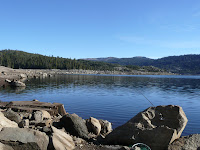 To give you a little more impressionistic view, this pile of rocks (On my left when I'm fishing next to the dam) is usually underwater. 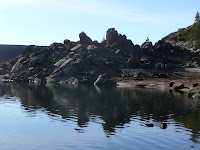 OK, so how did the day go? Got to my spot next to the dam at 0915 and set up one rod with Power Bait (Rainbow of course) and my little Okuma with Kastmasters. I won't go into the colors of Kastmaster, let's just say they didn't work.

Did I tell you I replaced three of my reels (I'm tough on reels)? I went to Fisherman's Warehouse last Tuesday (remember?) and talked them into a deal so I didn't have to drive down during the ISE show and purchase them there. I bought 3 Diawa Sweepfire 2000-2B's and new line for each. My two rods with 4# got Trilene XL and my Okuma got 2# Yo-Zuri Fluorocarbon.
First Rainbow came at 0930 and was lip hooked, so the first fish of 2012 went back for another day. It was about 10". Only fair to put the first fish of the year back. Second fish came at 0940, it was about 9", lip hooked too, and went back for another day. Only fair to put the second one of the year back too. I'm just a fair kind of guy.

I hung around for a couple more hours, but didn't get any more hits. I tried a couple other places, but nothing there either. Then the Cardio Walk back out. The last time I did this walk, I had to stop 4 times and rest before getting back to the truck. Today, only one stop to rest. Wow.

That's it for this week. I think I'll mosey down to Lake Amador next week and see if I can partake of some of those big Cutbows. You like that mosey stuff? Got it when Jimmy Carter was in the White House. It's a Southern thing.