All I Want For Christmas

Was a fish without bugs, or at least I thought.

Headed out to Lake Camanche North Shore this morning with the idea of fishing a few hours and running some errands in town. Got to the lake just before 0900 and put two lines with Power Bait, in at the sandy cove across the pennisula. I was fishing with a 18" leader, but found out the water was a lot shallower than last time. Being the determined person I am, I held out for an hour with out a bite. I was set for the long haul though. I had water, peppered ham, Havarti cheese, Ritz crackers, chocolate chip granola bars, and of course coffee from Starbucks.

Packed up and crossed to the lake side of the pennsula at the spot with two buoys. The place where the pink Kastmaster worked so well. Couple of guys to my right (down a ways) had caught one, so prospects looked good.

Set out one rod with Power Bait and my little Okuma with the pink Kastmaster. Fifteen, twenty minutes and nothing so I switched to two rods with Power Bait. Then I had one of those light bulb moments. An 18 inch leader probably wasn't getting the PB up high enough, so I re-rigged with a 30 inch leader and a little Sweet Corn on one and Anise on the other.

First fish came at 10:35 on the Sweet Corn. It had that bacteria look on it's sides like someone grabbed it with dry hands and then released it. Cut it loose so it could spend the rest of it's (and I'm sure, short) life in the lake. Put both rigs out with Sweet Corn. Second fish came at 10:50 and this one had slimy dots on both sides. Double click on the picture below and look by the tail, you'll see what I mean. This fish was #3 at 11:15. 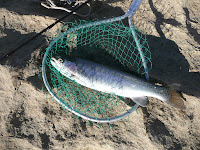 I wasn't sure what the slimy dots were, so I cut it loose too. Number 4 came at 11:35 and number 5 at 12:15. All had the slimy dots on them so I cut them all loose. With all five having those slimy dots, I decided just to call it a day. No sense trying for any more.

Bouncing around in my brain, I was thinking Cope Pods, but it's winter and there shouldn't be any. Whirling disease? Slime disease, what the hell is that? Not Quagga or Zebra Mussels. Not the Australian or New Zealand snail thing, what ever that is. I had no idea.

So, on the way out, I stopped and talked to Aaron at check-in and he said that the slime spots are from Cope Pods, but it's what Cope Pods leave behind once they depart from the fish. It's on the skin, but doesn't penetrate the fish and the fact that these fish have the slime spots means they are hold overs that have passed the summer with the Cope Pods and survived. They are also OK to eat. Learned something new.

So the moral of this story is: "If you don't catch something in one spot, move, re-rig, change flavors, flip a coin, do a fish dance" anything that will entice the fish.