Ok, here's how it went. Left home 0730 and drove down the hill to Sacramento. With this to do and that to do, I started at Starbucks for a cup of coffee and a stop at American Fly Fishing Co for some leaders and tippet. They are right next to each other.

Then on to Walmart for a couple of tripods to make some custom fishing rod holders. More on that when I get them fixed up. Custom stuff takes time.

Third thing on the agenda was to stop at Fisherman's Warehouse (they open at 10:00am) for a couple new (cheap) reels and some new line. I'm extremely hard to three things. One, my glasses. Two, my watch (which is the reason I don't wear my good watch fishing), and three fishing reels. I've just about destroyed the reels on my 4# test rods and the one on my Okuma rod with 2# test. I have a habit of dropping them when I have a fish on another rod. OK, now you can yell at me.

Now it's just after 10:00am and I'm on my way to the Department of Parks & Recreation (they open at 10:00am too) for the annual river parking permit. Why pay $5 a pop when a $50 permit will allow you to park all year?

Then on to the American River at Gristmill Access to try a little Steelhead fishing with a spinning rod instead of fly rod. Change of year, change of tactics. Guys at Fisherman's Warehouse said try Little Cleo's in silver/blue and silver/green. Think they'd have any in stock? Not on your life.

I hit the river (Ok, walked down from the parking area) at 10:30 and fished from: 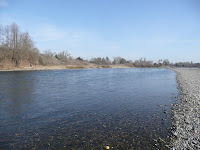 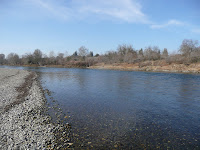 with a silver/blue Kastmaster, silver Little Cleo, and a burgandy/bronze Little Cleo.

Once I got back to where I started, there were a couple of guys doing the Spey Rod thing and you know how I feel about Spey Rods. If you've forgotten, remember the Deschutes adventure in October of 2009. On top of that, they had a couple of black Labs running across the river, just above the riffles. Any Steelhead around there were long gone.

It's now Noon and I decided that since I'd been wandering around all morning and need some food, I wrapped it up for the first day of fishing 2012 and headed for Micky D's for a burger and fries. Then headed home. Next time I'll get here a little earlier.

If you double click on the top picture, you can see the guy standing in the river. Across the river from him is Harrington Access where I've fished before and will probably try next time.

Steelhead, I'll get one of those suckers, yet.