Welcome to the new followers.

Howard (Wind Knots & Tangled Lines) has a challenge out there about your fishing career since day one. I could go through and list decade by decade, but that would take me thinking about those years and when I got current, the short term memory loss would just screw things up anyway. So let me do a short list. I started fishing in the early 1950's. As of today, that would make my fishing career just short of 60 years. There you go. Maybe some day I should do an autobiography. 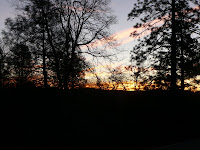 This morning I headed out to the vampires (yes it's doctor time again) for the usual gallon or so of blood and pee in the little cup. Blood letting this morning was a fasting one. Since they don't allow you anything to drink (or eat) after midnight, how much pee could you have in you? Not very much. Hope it was enough.

After the blood letting, I stopped by the donut shop (I could hear cardiologist screaming in the background) and got a BIG cup of coffee and a couple of maple bars. Don't they always give you something sweet after giving blood? Then I headed out to Lake Amador to partake of some of those big Cutbows.

Got to the lake at 0800, signed in, and headed over to the spillway. Oh wait, I have pictures I have to go downstairs to download them. I'll be back in a few minutes.

OK, that's better. Now, I fished from 08:15 to 10:00 and got nary a bite on Power Bait or Kastmasters. I also tossed a Red Sonic Roostertail to no avail. Currently I'm writing an article for the paper about fishing myths. One of those myths is that you can't catch fish the day after a full moon. Last nights full moon, this morning. 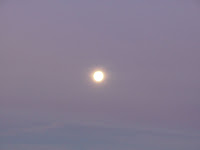 It's now 10:00am and I've been fishing for about 2 hours without a bite. Will the myth hold up?

Are you kidding. You know we all catch fish on a full moon. The first Cutbow came at 10:15. I played around with it on my Okuma and 2# test while I got out the camera. A couple of shots with one hand while holding the rod with the other. Got to get me a cameraman/woman. I used to have Bob, but he's been indisposed. Maybe a bikini clad woman in waders? 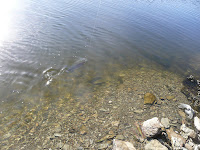 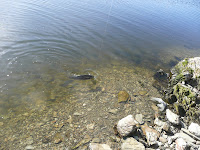 The second one came at 10:20. It hit the lure just as the lure hit the water. Both were caught on a 1/4 oz Kastmaster in the Brook Trout color. Rainbow Pink and Firetiger didn't get any interest. This color has been good in the past so I kept using it. Both fish were released, in fact the second one, because I was messing around with the camera so much, broke the line and took off with my lure. That's OK, I had a spare. 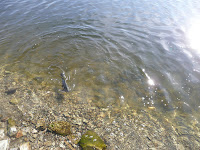 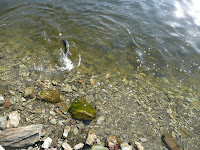 A couple of casts later I got two hits on the same retrieve, but wasn't able to hook up either one. Might have been the same fish. That was it for the day. I fished until Noon and called it. I had been standing since 08:15 and when I do that, my back hurts something awful. It's hell getting old.

It turned out to be a fish catching, myth crushing, sun bathing, kind of day at Lake Amador. Water levels? Lowest I've ever seen them. We need some rain, badly.

One other thing, they've stocked 61,000 lbs of those big Cutbows. The two today were right around the 1 pound size. I did hear some shouting across the spillway about a 4 or 5 pound fish being caught. Yesterday a regular at the lake caught a 10 pounder from a float tube. A lot of pontoon boats, a few Yaks, and a bunch of boats. Word from the boats was night crawler behind flashers and Rapala's. That's it for today.

Till next time, thanks for stopping by.