Went into my book "The Complete Book of Western Hatches" and found a picture of what I think is this bug. They called it Chloroperlidae (Adult) Green Stonefly. 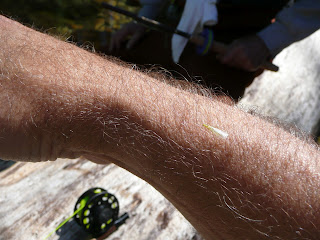 So, in my dry fly box which has about 10,000 flies (maybe not quite that many), I have one called Trude Royal that is supposed to be a Stonefly. Maybe somebody who is a might more Entomology smart than I am could suggest a reasonable facsimile or maybe the Trude will be sufficient.

I want to take a shot this Sunday when I go with my son to the North Fork of the Cosumnes outside Placerville. For those not familar with Placerville, California, it was called "Old Hangtown" in the gold rush days. There was once a manniquin hanging off one of the buildings right in downtown, but I guess some people don't have a sense of humor.

"There's gold in them there sluice boxes". There was a lot of gold mined in the Sierra Foothills, but that's another story. This one is in the book. If you're interested, see the top left of the blog on how to order "Fishing, Ghosts, and My Mother's Gray Hair".

On the suggestion of Blake Hamilton "Illinois Wisconsin Fishing" blog, I'm off to the American River for a little Shad fishing tomorrow. Let you know what happens.