Before I get into what  transpired on Sunday, let me first say that the post for Friday's trip was post number 500 for Northern California Trout. Never knew I had that much to say. Thanks for all those who follow and read what I write.

Second, by the picture below, guess who's back. Even the motion sensor light didn't deter him last night or should I say this morning at 12:06 am. For those not familiar with my past confrontations with the Black Bear, that's who again, attempted to destroy my trash can. He finally took off when I turned on the outside spot light.

Sunday on vacation. Our 15th anniversary, by the way. We grabbed coffee/latte and a couple of muffins and headed to Fort Bragg. You have to double click to make the picture larger to read it. 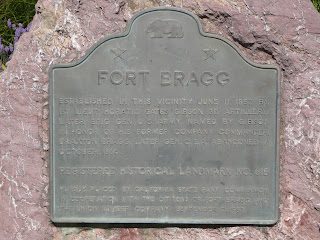 In the summer of 1857, First Lieutenant Horatio G. Gibson, then serving at the Presidio of San Francisco established a military post on the Mendocino Indian Reservation approximately one and one-half miles north of the Noyo river He named the camp for his former commanding officer Captain Braxton Bragg, who later became a General in the Army of the Confederacy. The official date of the establishment of the fort was June 11, 1857. Its purpose was to maintain order on the reservation.

We drove down to the Noyo River Harbor and ran into this young man from Chico, California who was on vacation too. He was making an attempt to catch crab (I'm assuming Dungeness Crab) with this hookup he has in his hand that is attached to a fishing rod. The basket like box in the center is where you put squid or octopus for bait and the rings are slip lines. The theory is that the crab comes in to eat the bait and you lift the rig catching the crab in the slip line.

We hung around for a little while, but pulled out before any crab were brought to hand. If you read this post, let us know if it worked.

Next stop was Point Cabrillo Light Station State Historic Park. A nice little 1/2 mile walk from the parking lot to the lighthouse and back. Of course there were those Asses that just drove out instead of parking and walking like the rest of us. Quite a few actually.

The pictures below at are the houses for the light keepers. There are cottages that can be rented as a vacation cabin behind these buildings.


This bush is a Coastal Cypress. They grow all along the coast and thrive in the damp, foggy, climate.

We got back to Mendocino and had lunch at the Mendocino Hotel at a table with an ocean view. The lunch was actually a champagne breakfast then walked back to our room stopping for chocolate at the chocolate shop and ice cream on the way.

Our anniversary dinner was at the Little River Inn in the Wisteria Room that has an ocean view at all tables. I had lamb shanks and Katherine had smoked chicken.

Monday morning we packed up and jetted down the highway. We made it home in just a little over 6 hours taking the freeway most of the way instead of the scenic route.


Don't think I'll get back to fishing until next week, but I'll let you know when I do.