My wife had to be to work at 0600 this morning so I took the opportunity to take another shot at New Melones Reservoir.

I headed out at Zero Dark Thirty (not to be confused with the Seal Team 6 movie about squashing Osama Bin Laden)  and quickly realized that it's damn dark at 0530. Most days I'm barely into my first cup of coffee at that ungodly hour of the morning.

So to satisfy my need for additional caffeine (after two cups at home) I stopped at the donut shop in Jackson and got a large cup.

Exercising my Geezer pass (I purchased it back on the 2nd as I left) for all Federal Parks, I zinged past the check in and was at the parking lot by 0715. With massive equipment (three rods, tackle box, net & stringer, chair, rod holders, rags, camera, gloves, hand warmers, and a bottle of water) in hand, I made my way over to the exact same spot I fished on the 2nd.

I had just gotten my red camping chair set up so I stopped for a second and took a quick shot of the sunrise for your enjoyment.

No fooling around today. Two rods out with rainbow Power Bait and a couple of dabs of Pro-Cure Garlic and the hits started. By 0930 I had 4 on the stringer and had released 4 smaller ones for another day.

Then I got adventurous. I put a #18 gold treble hook on my little Okuma with the 2# test and added a small split shot. A small blob of rainbow Power Bait, the dab of garlic, and out it went. I don't think it was in the water for more than 15 seconds and the fight was on. It was a 12 incher, but on a light rod, it was a fight with a screaming drag (OK, maybe not screaming), reeling back in, and the line screaming (not screaming this time either) out again. Lip hooked, it went back for another day even though I only had four on the stringer because I knew there would be more.

By that time, the two guys to my left had seven on their stringer and the guy around the corner had five on his. I played around some more with the Okuma until I got it caught in the rocks and had to break the line. Then I  went back to the original two rods and right around 10:00 I had a double hookup. One was about nine inches and the other around twelve inches.

I gave the nine incher to a gentleman that had just joined us to start his day and put the other one on the stringer. Since I now had five (the limit) I packed up and headed home.

I didn't take any pictures of the fish, but they looked just like the five below that were from the 2nd. 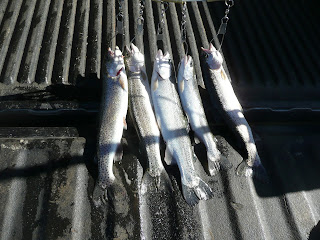 The day totaled up like this. Five kept, one given away, and five released for another day. Not bad for the second fishing trip of 2013.