All Those Fish To Bob (I plow for fish)

Just wanted to show you what all those fish I bring to Bob does. Yesterday at 1:30 pm the ground was dry, it was sunny (well kind of) and then the the skies opened up.

Now, no dissing Bob for the crooked plowing. Granted he doesn't have a laser sight on his tractor for guidance, but the problem lies with my driveway. Yes, it's crooked like that, but would you want to shovel all that snow? It's 900 feet from the house to the property line and then another 600 feet or so to Bob's driveway. Well worth catching all those fish for Bob.

If you watched National News this morning (I watch HLN) they showed pictures of the storm and put the caption that this was occurring in Sacramento. Granted the snow level was down to 900 feet (which put it below Jackson) yesterday, but Sacramento is at 100 feet above sea level, maybe. No snow there.

This is what the house looked like after I got done shoveling the deck and walkway. 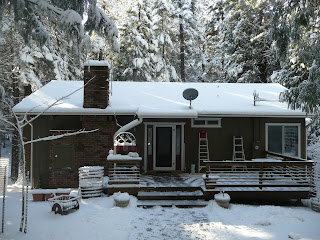 Just a little taste of winter. Hey you guys in Colorado, it's coming your way.