Back on the 5th I mentioned that Howard (WDSTK3 Handcrafted lures) sent me the six lures below to try in the local lakes. Today I headed out to Lake Amador to give them a shot. 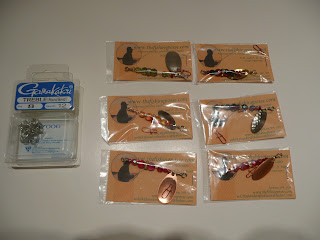 I got to the lake at 0830 and once I had one rod out with rainbow Power Bait, I started throwing the lures. I used a fan pattern and gave each lure about 10 casts each. Sixty casts later, I have to say it's not that there aren't any fish in this lake, it's that I've been jinxed.

Brings me back to the Steelhead on the American. Bouncing an egg imitation off it's nose and it wouldn't bite.

The jinx is so bad, I hang my head in shame being called a trout fisherman.

You believe that? I doubt it. I'm off to the "secret" lake this morning to see what's shaking. Maybe the six lures will work on those browns up there. I'll let you know tomorrow.