Not So Good Two Days Later

Target: West Fork of the Carson River at Hope Valley.

Jetted out of the house at 0700 and after a coffee stop at Cooks Station, was on the way up the hill. Sitting on two cups of coffee from the morning pot, I needed to make a pit stop. I pulled off at what I thought was just a place to take a w... and discovered some pretty nice scenery, so I took some pictures. It's not anywhere special just mountain shots. 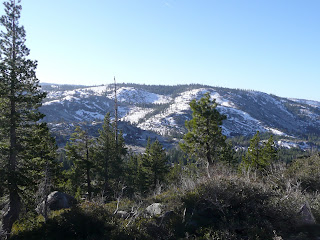 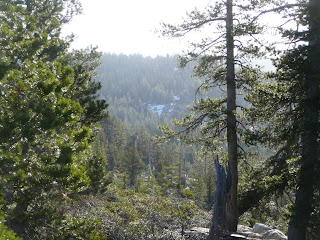 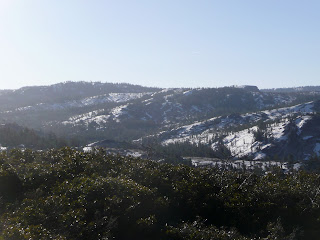 Back on the road and over Carson Summit, down the hill past Red Lake and a right turn on Hope Valley Rd. Then I went to "THE SPOT". Explain "THE SPOT" for the audience, please.

"THE SPOT" is where the local forum sends people to fish the West Carson if you don't like combat fishing at the Highway 88 & 89 bridge. Here's a couple of pictures of "THE SPOT".

Looks like good water to me, how about you? Fished an Orange Stimulator, Royal Wulff, a Green Something (come on, I've got a lot of flies in my dry fly box that I have no idea what they are), Parachute Adams, and a Yellow Humpy. OK, I know what a few of them are only because I have a cheat sheet in the fly box.

Didn't see anything that looked like a fish. I even stooped as low as putting a small Panther Martin on my little Okuma and trying that. I did see this fuzzy thing in the picture below. My best guess is a North American River Otter.

Since I didn't catch anything there, I moved upstream about a mile and worked the area below.


Same thing. Threw five or six different flies, lost five or six in the bushes and nothing. Not a fish to be had. Last year I fished this same area and caught five Cutthroats, but it was late June so maybe that's the difference.  I also fished it with my Tenkara rod. A little plug for Tenkara.

Packed up, ate a sandwich and headed over to the Highway 88 & 89 bridge just to see what was happening. There were a dozen or so people fishing and nobody catching. My guess is they fished the area to extinction over the weekend.

I left West Fork and on the way back stopped at Red Lake (The devil made me do it). I threw a 3/16th silver Kastmaster for a while and then put my two spinning rods out with Power Bait. The Power Bait produced nothing. The silver Kastmaster produced ONE eight inch Cutthroat. Around 11:30 the wind had picked up to almost hurricane force. OK, maybe fifteen or twenty miles per hour, but it was blowing so hard that I had tears in my eyes behind my sunglasses. OK, I know you're going to ask if the tears were from the wind or not catching any fish. I think the first although it could have been the later.

I headed back toward home and on the way stopped at Caples Lake (elevation 7806) and thought the coloring of the ice still on the lake would make a good picture. This is at what I call the upper end of the lake. Further to the left is the inlet where Woods Creek feeds Caples. The lake is currently about 50/50 ice and clear water.

Well, that's it. I think I'll take a couple days off. Till next time.