Sometimes You Can't Go Back

I had so much fun on Tuesday at Ice House that I decided to make another run up there this morning. As it turned out, the wife needed to be at work at 0700 so we were out the door at 0615. I stopped for coffee in a little place called Fresh Pond. It basically consists of a Chevron Station and a small store.

The unique thing for me is that I used to work in that building some 18 years ago. Not that exact building, but the one that used to be there. It was an old Ranger Station and the company I worked for rented it. Now I walk into the store and over by the cold case, I say "That's where my desk used to be". Deja Vu all over again.

I got to the lake at 0800 and had two rods in the water by 0815. One with rainbow Power bait and a couple dabs of sweet corn. The other with two white Power Eggs and a night crawler. Thought I'd try something new.

While I awaited the first bite, I took a couple of shots around the lake.

At 0915 I brought the first fish to hand. It was on PB & garlic scent (changed from Sweet corn), but it was rather small at around 9 inches and lip hooked so it went back for another day.

The second one didn't come to hand until about 10:45. It was little too so I put it back. This one was on sweet corn. Sometime you just can tell what they want. They're very confused in that lake.

Like I said, you sometimes can't go back. I was anticipating another day like Tuesday, but weather wise it a completely different day. Apparently the fish thought so too.

So while I sat waiting for the next bite and I had three that I missed, I saw this "thing" fluttering around just far enough out that I couldn't tell what it was. The photo's were taken with 10X telephoto. 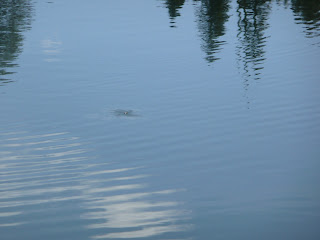 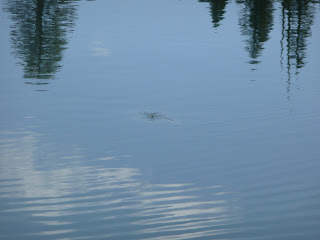 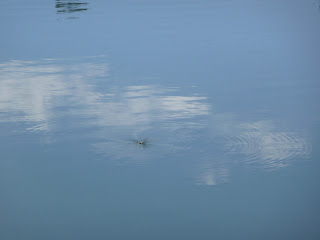 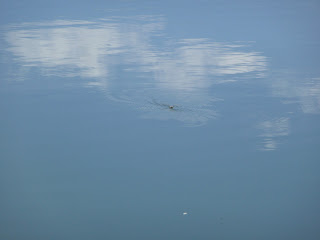 I thought maybe it would come close enough to shore that I could get a good look at it, but on the other hand the way it was fluttering around I'm surprised some big brown didn't inhale it. It fluttered out there for 15 - 20 minutes just going around in circles. Would have made a spectacular surface take.

The next 6 weeks are going to be fishing trips of just an hour or two here and there so the posts will be short as well, but I'll try to keep you interested.