No, not the one that keeps trying to get in my trash can. Although that bear is around again. The other day I heard him clacking down by the creek, but it's so dense down there I couldn't see him. This is about Silver Lake and Bear River Reservoir.

I had a few spare hours so I took a drive up the hill to check out Silver Lake. I've not heard anything about catching so I thought I'd see for myself. Grabbed a coffee at Cooks Station and hit the road. I was at the lake at 0800 and had two rods out, one with PB & garlic, the other with just plain PB.

While I sitting, absorbing the nice surroundings, I took a few picture for your pleasure. This first one is kind of hazy and I apologize for that because the sun  was in my face and I couldn't see what I was looking at. What I was trying to accomplish was to get a shot of the creek running into the lake. There is so much running water that it was loud all the way across to where I was.

Double click and look at it in a bigger shot.

This is my little island in the lake. From here I first fished at a 45 degree angle (Y), one to the right and one to the left. Then I went to a 90 degree angle (T). When I didn't get any interest I went straight out (II). How did I do with the little symbols? Just trying to be cute. 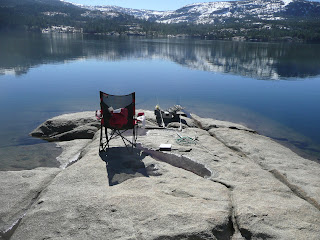 In a reverse shot from where I was sitting, you can see what I mean about my little island. I came out of those trees and across the water and rocks to get where I was. Hey, I didn't even get my sneakers wet. 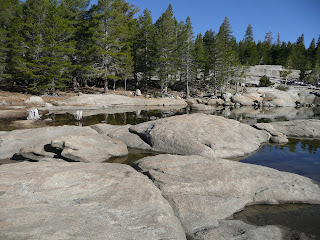 Again, while I was absorbing the nice surroundings I noticed (I'm very aware of my surroundings since the guy on one of the forums was talking about a 3 foot rattlesnake with 10 buttons) these little bugs dipping down to the water and then taking off and dipping again. I would assume (I hate using that word) they were laying eggs. I couldn't get close enough to one to see what it was but I guess this one was spent as it dropped into the water. It's the little white speck in the black crack. 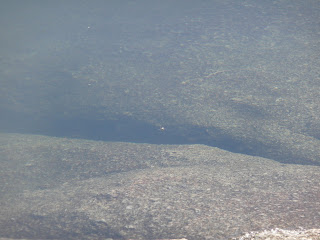 Somewhere along the way I actually got a bite on the rod with the Anise. Oh, sorry I forgot to tell you I changed the rods to one with sweet corn and one with Anise. Guess I got all excited about the bug laying eggs. I did miss the bite, but I reeled it in, put on new PB & Anise, and when I threw it out the fish hit it again almost instantly. OK, I missed that one too. That was the total excitement for Silver Lake.

After three hours of absorbing the nice surroundings, I packed up and hopped over the rocks and back up the hill to the truck for a drive home. Since I was going by Bear River Reservoir anyway (and I noticed that the resort sign said that it was open) I drove down the 3 miles to see if the gate was open and voila! it was. Naturally I had to drive down by the lake, which has quite a bit of water in it, and with about an hour of time left before I needed to be elsewhere, I stopped and put out a couple of rods. I also took a few more pictures because I had a lot of spare time.Tthere weren't any fish biting.

On the other side of this hump of rock here, there were three of four other people fishing, but they hadn't caught anything either. As the clock stuck Noon, I packed up and headed home. Skunked for the first time since Steelhead fishing in February. I know I didn't catch anything at Middle Bar Bridge last month, but I don't count that one.

My Tenkara replacement part is at the Post Office, I think (I got a notice from the mail girl that what ever it is it won't fit in the mail box) and maybe Monday I wander up to either Caps crossing or PIPI Valley Campground and do a little small stream fishing. I'll let you know.