We picked the campground at Hope Valley because it was fairly close to home and we haven't been camping in more than ten years, so we needed a trial run. It was also remodeled last year and the spaces can be reserved through Recreation.gov. That way we knew we had a space when we got there.

Back on July 23rd while I was zooming up to Upper Blue Lake, I stopped by and took pictures of the spot. Here they are.

On the left is a charcoal stove and a place to put things (pots & stuff) while you're cooking. 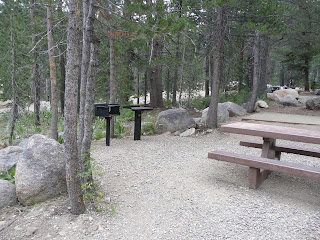 The picnic table which is made of concrete and heavy enough that you wouldn't be able to put it in the back of your pickup to take home. Behind it is the tent pad. Perfectly level and filled with a gravel/sand mixture that holds the tent pegs, but isn't too hard on old bony knees. On the right is the fire pit. 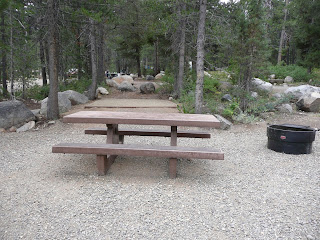 The brown box on the right is the bear box. No, there aren't any bears in it, it's for your food at night so the bears don't feast while you sleep. 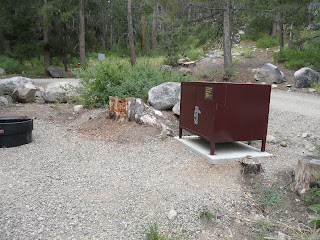 Below is where you park, past the picnic table, to the tent pad. Just a whole site look. 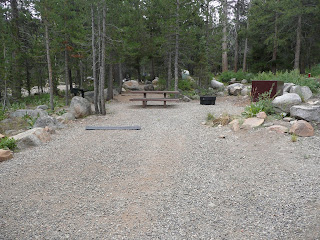 And just in case you had the urge to know, that's a toilet shot from the parking area. 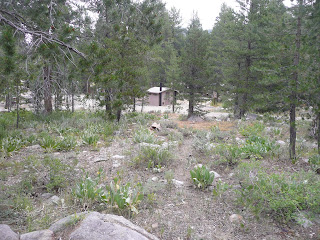 I'll start with Thursday. The reservation started at 2:00 pm, so we decided to leave at Noon, stop at Kirkwood Inn for lunch and then drive over Carson pass to the campground. We opted for lunch at home and then left at 1:30 pm arriving at the campground just before 3:00 pm.

Once we got everything unloaded, the tent put up, and the rest of the stuff in some semblance of order, I decided to put off any fishing until the next day.

One note, when we got there we stopped by the campground host and after letting them know we were there, asked if they would like a couple fish for dinner if I caught any the next day. I got a "sure" with the eye roll of "yeh, right".

I'll leave you with a shot of some semblance of order.

And a fire in the fire pit.
I know the west is on fire, but fires in the pit were still allowed in this campground although they were banned in all other campgrounds and open spaces, so we did the Indian fire thing with wood we brought from home. Not familiar with the "Indian fire thing"? Indian makes small fire and sits close, white man makes big fire and sits way back.