Every time I drive out to New Melones Reservoir I go by a place called Carson Hill (population 37). Along the side of the road is one of those historical markers. You know the kind, a shaped rock with a metal plate glued to it.

Carson Hill is registered as California Historical Landmark #274. Volcano is an historical landmark too. A plug for our little town.

Unlike most of the places with "Carson" in their names in the American West, Carson Hill is not named after explorer Kit Carson, but instead it is named for Sgt. James H. Carson, a member of Colonel Jonathan D. Stevenson's Regiment of First New York Volunteers. Same guys that founded Volcano.

The Morgan Mine (at Carson Hill) was one of the richest mines in the area, so much so that the miners didn't even have to dig. They would simply blow up a vein and collect the pieces. The mine was also where one of the largest nuggets in the state was discovered, a 195 pound troy block of gold that was worth $43,000 at the time.

Let me explain this a little. there is 12 troy ounces in a troy pound rather than 16 ounces in what you would know is a pound. Going into a little more detail, a troy ounce is 31.10348 grams and a regular ounce is 28.3495 grams making a troy ounce a little heavier.

Back to Carson Hill. One of the Gold Country's more colorful stories is reported to have occurred here (although several other camps lay claim to a similar tale) during the early days of the gold rush. The tale goes that a man who had lost his life in a mining accident was being buried in the local cemetery. As the services were being held, one of the mourners noticed something glittering in the newly turned earth of the open grave. The ceremony was forgotten as everyone, the minister included, quickly located a claim.

As with many of the places in the Motherlode, Carson Hill is considered a ghost town. Nothing unusual about that as most places in the Motherlode are haunted. The gold rush in 1849/1850 was a very violent time in American history. Just to give you a few examples of places just around here, the Volcano Union Inn, St. George Hotel (both in Volcano), The Imperial Hotel and Amador Hotel in Amador City, and the Argonaut Mine (47 miners died in a fire 4650 feet below the surface). All these places are considered haunted.

To add credence to this ghost story, Laurie Lockhart (owner of the Amador Lake Resort) was in the Imperial Hotel one night and a ghost of a cowboy walked up to her and poked her in the chest. She says it scared the hell out of her.

Haunting in the Motherlode is just a fact of life.

I'm hoping you can read the two plates below. 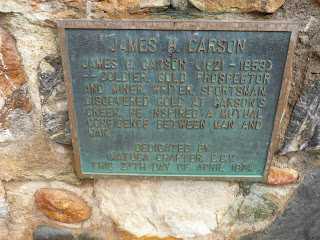 I just thought you'd like a tour of our rich history here in the Motherlode. If you like this one, I'll do some more.